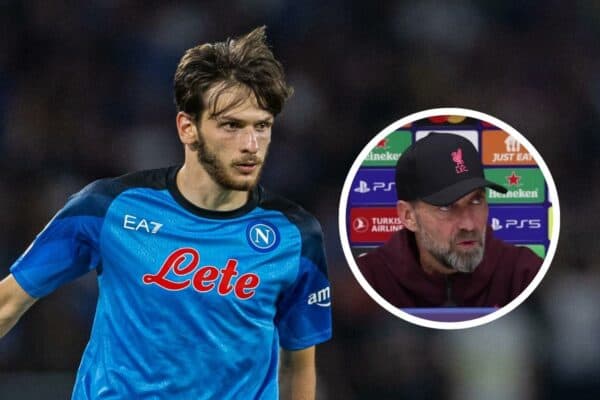 Khvicha Kvaratskhelia has burst onto the scenes as one of Europe’s most in-form wingers and Jurgen Klopp was asked about Napoli’s No. 77 after Liverpool’s win on Tuesday.

Kvaratskhelia is only 17 games into his Napoli career but already has eight goals and ten assists for the Italian side, making an instant impact and quickly hitting the headlines.

The 21-year-old joined Napoli in the summer for just £8.6 million from Dinamo Batumi, not long after Kvaratskhelia left Rubin Kazan due to Russia’s declaration of war on Ukraine.

Not afraid to take the game on, he has risen from obscurity to become one of the most talked about attacking players, and Trent Alexander-Arnold had the job of stopping him at Anfield.

Kvaratskhelia left without making a scoreboard impact for only the sixth time this season and Klopp enjoyed his battle against Alexander-Arnold, who he noted was second-best on occasion.

Pacey, skilful, not afraid to take on the opposition and in Klopp’s words “cheeky,” Kvaratskhelia cleary made an impression, and the Liverpool boss will not have been alone.

“He’s a good player,” Klopp said of the Georgian and his battle with Alexander-Arnold. “Both are good players, so it’s a really difficult one.

“I know people will talk about one or two situations when Trent tried to be in front of him and the ball goes through.

“But he is really good, the boy, and really quick and you have to defend him together in these moments. When he has the advantage of the first movement, then he is already gone.

“You have to try to be there in the moment when the ball arrives, but if you cannot do that then you need to be protected because he has speed, he is cheeky, he goes inside, he can go outside, that makes it always really difficult.

“A good player and I thought Trent played a really good game against him, was really on fire, didn’t get frustrated by one or two situations where he was second-best, stayed in the game and I liked Trent’s game tonight.”

While only making the move to Napoli in the summer, Kvaratskhelia will not be short on suitors but Napoli would be remiss to let him go and if they did, it will be for a sizeable increase on the £8.6 million they parted for the 21-year-old.