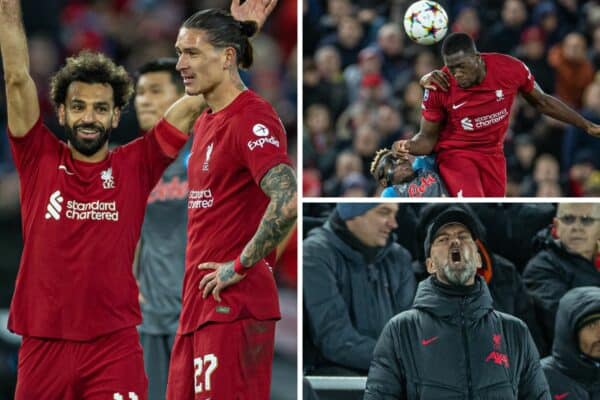 Konate, Anfield & a look ahead to Tottenham – Last word on Liverpool 2-0 Napoli

As Liverpool concluded their Champions League group stage campaign with an impressive 2-0 win over Napoli, three Reds supporters discuss the club’s bizarre recent run of results and look ahead to Sunday’s clash with Tottenham.

Jurgen Klopp‘s side were unable to secure the four-goal winning margin that would have seen them top Group A, but in truth, nobody expected them to.

After the huge disappointment of a home defeat to Leeds last weekend, this was a much more encouraging performance, with Liverpool winning all five of their group games since their away loss to Napoli in September.

Here, This Is Anfield’s Jack Sear (@JackSear) is joined by Joanna Durkan (@JoannaDurkan_) and Jack Gill (@jacklfcgill) to discuss a good night at Anfield, another formation change, and this weekend’s trip to north London.

JACK G: Yep, typical Liverpool. The way this season is going we’ll probably beat Tottenham at the weekend and then lose to Derby and Southampton before the World Cup!

In all seriousness, though, it was a much better performance against Napoli. We limited them to very few chances and obviously those two goals at the end made it a great night.

We haven’t won the group, but I don’t think anyone really expected us to in the end. The main thing is we’re through!

JACK S: Our results since the September international break are completely bizarre, aren’t they?!

JO: Oh, so very Liverpool. Take from the rich, give to the poor – a noble thing to do in any walk of life but think we’ve reached our quota now!

It’s indicative of our issues and the inconsistencies from one game to the next, we’ve not lost two games back-to-back but we can’t keep having to have the same need to ‘respond’.

Liverpool certainly have a flair for the dramatics and I don’t expect that to change anytime soon, but as Jack, the first, said, the bonus in it all is we’re through to the last 16 with the joint-second highest point tally.

A much more solid performance. Which players stood out for you?

JO: It was brilliant to see Ibou back on the pitch, he just offers a different level of security and physicality on the right – and those runs out of defence were needed.

Now to keep him fit and on the pitch!

Thiago was another that had an impressive game, never stopped running and marshalling the team, I thought he was certain to score in the first half, would’ve been a class goal too.

There were quite a few positives from the match and I liked what I saw from the brief cameos from Stefan Bajcetic and Calvin Ramsay – but what about Darwin Nunez. Blockbuster.

He’s brilliantly chaotic and lapped it up when Anfield chanted his name, as he should – it’s these performances that boosts his confidence and he needs to take it to Tottenham now.

JACK S: Plenty of positives, I thought. There’s no doubt Ibou Konate has been missed. He’s a class act.

I’m glad Curtis Jones is getting some good publicity as well. He’s had a tough year or so but I think he gets some harsh criticism. This is a big, big talent, and that’s why Klopp gives him plenty of game time when he’s available.

JACK G: I thought Ibou was class, it was great to have him back.

Thiago was once again an absolute joy to watch. That moment where he pinged the ball forward from our own half to Salah before receiving it back and forcing a good save from Meret was unbelievable. If that had gone in I’d have had that on repeat all night, Joanna too by the sounds of it.

I thought Tsimikas had a good game and Jones had some positive moments. The introduction of Nunez undoubtedly changed the game and made us a lot more dangerous in front of goal.

That disallowed Napoli goal seemed to liven up the crowd a bit?

JACK G: Yeah definitely. The atmosphere for the first 60 minutes was a bit flat to say the least, which also matched the tempo of the game. The goal burst everyone into life and it felt a bit more like Anfield after that.

JO: It was a weird atmosphere at times considering the last result and that it was all but a dead rubber, but the disallowed goal definitely saw the atmosphere turn.

Although Napoli’s players throwing themselves to the ground any chance they got also had the same effect, and if I saw Osimhen cry foul one more time…

Far from a classic, as you’d expect, but Nunez was showed plenty of love – as too Ibou.

JACK G: I’m unsure, I think we have options now, and the fact Klopp has played a couple of different systems in the last few weeks makes us a bit more unpredictable.

I wouldn’t be surprised if the 4-3-3 is back and here to stay, though. We did look a lot more solid defensively. I’d like to see us go with it again on Sunday.

We know how Tottenham play and we will most likely control the game and see a lot of the ball, but we’ll have to be extremely wary of the threat they pose on the counter, something we’ve been extremely vulnerable to so far this season.

JO: Well, Klopp certainly has the unpredictability he wanted, that’s for sure.

A lot is being dictated by the personnel that he has and like Jack, I wouldn’t be surprised if we see the 4-3-3 remain in place on Sunday – Klopp was clearly happy to see we were “really compact” against Napoli.

If that’s the case, the team all but picks itself – if Henderson is a doubt then it’d have to be Elliott as the right-sided No. 8.

Tottenham are as inconsistent as Liverpool this season so should be an interesting one.

JACK S: I can’t see past Klopp sticking the 4-3-3 for Sunday. Robertson back in at left-back, back to the Fabinho/Henderson/Thiago midfield trio, and Salah, Firmino and Nunez up top.

That might mean Nunez is on the left, but I think he showed against Napoli that he’s more than capable in that position.

The likes of Gomez, Phillips, Bajcetic, Elliott, Jones, Oxlade-Chamberlain, and Carvalho will probably all get starts against Derby next week.