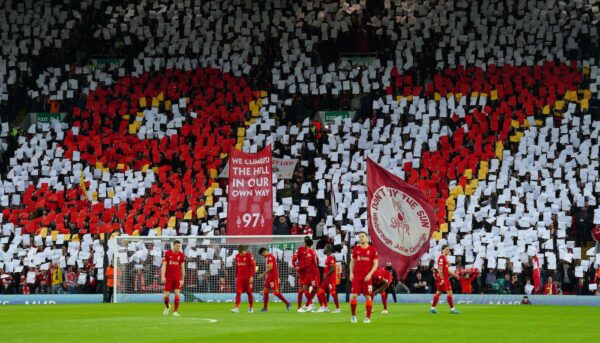 A Leeds fan who openly mocked the Hillsborough disaster in Liverpool ahead of the match between the two teams last weekend has been banned for life by the Yorkshire club.

A tweet with the words ‘Victim FC’, along with an image showing a supporter holding up the S*n newspaper outside Liverpool Lime Street station, circulated on social media before the game.

It’s believed that stewards identified the individual outside the stadium before the game and stopped him from entering Anfield, before he was subsequently arrested.

After numerous complaints were lodged to Leeds United Football Club, it’s now emerged that the supporter has been banned from attending all future Leeds matches as a result of his vile behaviour.

Thank you to @LUFC for standing with us in solidarity.
The individual who tweeted with insighting Hillsborough abuse, "victim fc", the sun newspaper and provoking violence has most definitely been banned from all future Leeds fixtures.

An email from Leeds United FC has been leaked on social media, condemning the individual for his behaviour and confirming that he had been punished.

On Tuesday, the FA released a statement regarding the increase in the “abhorrent” Hillsborough-related chants and abuse at matches.

“We are very concerned about the rise of abhorrent chants in stadiums that are related to the Hillsborough disaster and other football-related tragedies,” an FA spokesperson said.

“These chants are highly offensive and are deeply upsetting for the families, friends and communities who have been impacted by these devastating events, and we strongly condemn this behaviour.

“We support clubs and fans who try to stamp out this behaviour from our game.”

All for a few likes from like-minded rats on a free app. Well and truly deserved his slap he got outside Anfield.. followed up by a lifetime ban from his club.

Labour MP Ian Byrne, himself a survivor of the 1989 tragedy, said in a letter to the Premier League last week that such chants had now become “incessant,” and a “weekly occurrence” at games involving Liverpool.

It’s good to see Leeds take a no-nonsense approach towards this punishing this individual. Let’s hope this is the start of more clubs taking the same action towards any more similarly disgusting behaviour.