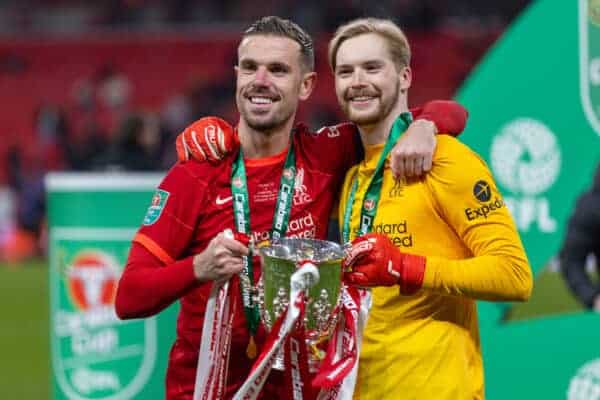 Liverpool will be looking to continue their positive League Cup record when their trophy defence begins with a third round clash at home to Derby on Wednesday.

Jurgen Klopp‘s side go into this game as the holders following the penalty shoot-out victory over Chelsea at Wembley last February.

Last season Liverpool played in a record 13th final in the competition and lifted the trophy for a record ninth time – one more than Man City.

The Reds last lost in this round of the competition in 2018 – beaten 2-1 at home by Chelsea.

These two teams last met in the League Cup in September 2016, when Liverpool won 3-0 with goals from Ragnar Klavan, Philippe Coutinho and Divock Origi.

That evening Roberto Firmino, Jordan Henderson and Joel Matip all started the game, while James Milner was an unused substitute.

The only other League Cup meeting came in October 1977 when the Reds won 2-0 at Anfield on the way to the final. David Fairclough came on as a 70th minute substitute and scored twice within five minutes.

The last game at Anfield between the two teams came in September 2007, when Liverpool won 6-0 in the Premier League to register their best-ever home victory against this evening’s opponents.

Another milestone for the boss?

Liverpool are four goals short of recording 50 in this competition under Klopp.

80 different players have been used in 24 League Cup games under Klopp. Thiago, Calvin Ramsay, Darwin Nunez, Fabio Carvalho, Bobby Clark and Stefan Bajcetic, amongst others, could extend that number even further.

The boss is the only German to manage the winners of the League Cup and is the sixth different Reds boss to lift the trophy.

Three in a row for the Reds?

Liverpool are aiming to register three successive victories for the only the second time this season.

They have not won in normal time at Anfield in the last six League Cup games since a 2-0 win over Leeds in November 2016.

Derby’s road to the 3rd round

Paul Warne’s side beat Mansfield Town 2-1 in the first round of this season’s competition, before a 1-0 home victory against Championship outfit West Brom saw them set up a third round trip to Anfield.

They have not beaten Liverpool in the last nine clashes since a 3-2 league victory at Pride Park in March 1999. In those nine games they have scored twice while conceding 23, with 13 of those coming in the last four.

Their last Anfield victory came in 1998, winning 2-1 in the Premier League thanks to goals from Kevin Harper and Paolo Wanchope.

Their best recent run in the League Cup saw them reach the quarter-finals in 2015, only to go out to Chelsea.

The last time they defeated a top-flight team in the League Cup was in September 2018, winning 8-7 on penalties at Man United after a 2-2 draw, with on-loan Liverpool player Harry Wilson starring.

The referee at Anfield on Wednesday will be Tony Harrington, whose only previous game in charge of the Reds was their 7-2 League victory over Lincoln City in 2020.

He’s refereed six Premier League games so far this season, the most recent being last weekend’s clash between Leeds and Bournemouth at Elland Road.

Harrington is yet to issue a red card in any of the matches he’s overseen in 2022/23.