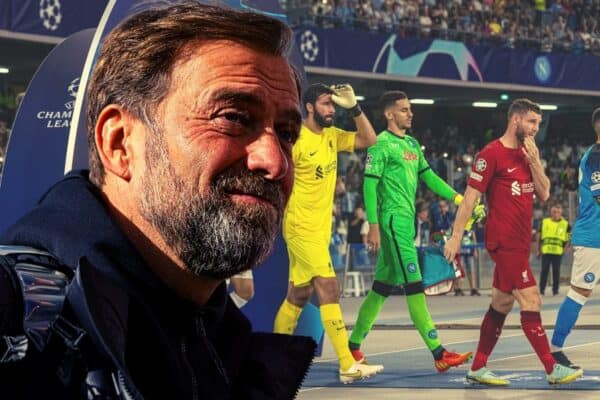 Jurgen Klopp will manage Liverpool for the 400th time tonight, with a chance to produce a first-ever feat when they host Napoli in the Champions League.

A win tonight will see the Reds win all three home games in successive Champions League groups for the first time.

Liverpool have won each of the last six home group fixtures since then.

The last two visiting teams to come to Anfield and win in Europe are from Italy – Atalanta in 2020 and Inter Milan earlier this year.

In all clashes with teams from Italy, Liverpool have won 17, drawn four and lost 17 of the 38.

Of those 38 encounters, 16 have been played at Anfield with the Reds winning nine and losing six. Napoli, in 2019, are the only Italian team the Reds have drawn against in front of the Kop.

But they have won only one of the last four games against opponents from Italy – the 3-2 group win over AC Milan last year.

Klopp will take charge of Liverpool for the 400th time, becoming only the fourth Reds manager ever to reach the landmark, following Tom Watson, Bill Shankly and Bob Paisley.

Klopp has faced Italian clubs in 19 games during his managerial career, winning eight, drawing one and losing 10.

Mo Salah is the joint-leading scorer in the competition this season with six goals, level with Kylian Mbappe.

If he scores once tonight, he will equal Steven Gerrard’s club record of netting 18 goals in the European Cup/Champions League at Anfield.

The Egyptian’s 17 strikes have come in 28 home appearances.

Salah, with one goal, would also equal Gerrard’s European club record of 41 goals.

Seven of Salah’s European goals have been scored against five different Italian teams, including the winner against Napoli at Anfield in December 2018.

Virgil van Dijk is in line to make his 200th career Liverpool appearance.

Trent Alexander-Arnold could make his 50th European start for Liverpool this evening.

Napoli’s record on the road

Away from home in all competitions this season, Napoli have played eight times – winning seven and drawing one.

They have scored 23 times and conceded only six.

They have not lost on the road since a 3-2 Serie A defeat at Empoli in April – unbeaten in the last 10 (nine wins and a draw) and have won each of the last six.

He has taken charge of a Liverpool game once before – the Reds beating Ajax 1-0 in the group stage two seasons ago.

Stieler will referee Napoli for the first time.