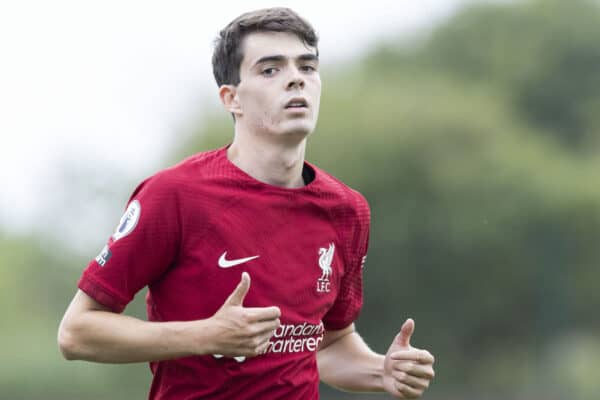 Liverpool have confirmed an extended contract for 19-year-old midfielder Dominic Corness, who has been training regularly with the first team.

With Leighton Clarkson and Tyler Morton heading out on loan and Jake Cain in and out due to injuries, Corness has found himself one of the more experienced heads in the academy midfield this season.

Luke Chambers and James McConnell are the only players to feature more often in the youth ranks, with the teenager a regular starter for both the under-21s and under-19s.

And with injuries plaguing Jurgen Klopp‘s squad throughout the campaign, Corness has also been called up to train at senior level on a number of occasions.

Having signed his first professional contract with the club nine months after his 17th birthday in February 2021, the youngster has now been rewarded with a new, extended deal.

Liverpool confirmed the news on Wednesday, with Corness’ previous terms having been set to expire in the summer.

Typically deployed as a deep-lying midfielder, the Scouser dictates play with his composed passing and eye for a ball, while also providing a threat from set-pieces.

Nicknamed ‘the Wand’ for his left foot, Corness has also deputised at full-back at points this season, filling in where required for the benefit of the team.

He is registered in Liverpool’s Champions League squad as part of List B, but is yet to be involved on a matchday in any competition.

Whether that will come later this season remains to be seen – with a clash with Man City in the Carabao Cup fourth round likely to see a stronger side fielded – but he could hope for more exposure in training.

There is a chance, of course, that he departs on loan in January, after a likely place in the travelling squad for the training camp in Dubai next month.