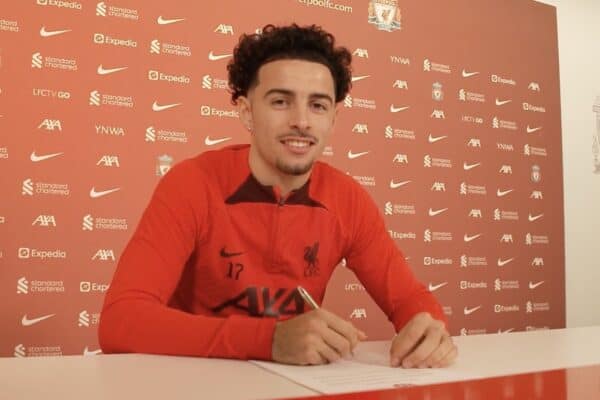 Liverpool have confirmed a new long-term contract for Curtis Jones, who becomes the latest player to commit his future to the club.

Over the past 18 months, there has been a clear effort to tie down the core of Jurgen Klopp‘s squad to improved and extended deals.

Klopp and his backroom staff have also signed with the club until 2026, with the manager recently stressing his commitment regardless of Fenway Sports Group’s plans.

Now, Liverpool have announced a fresh contract for Jones, who has finalised an extension to the deal he signed back in 2020.

Having joined the Reds as a nine-year-old in 2010, Jones enjoyed a rapid rise through the academy ranks and has now made 81 appearances for the first team.

That has brought eight goals and nine assists for his boyhood club, though the 21-year-old is yet to fully establish himself as a regular starter.

The hope will be that, over the course of his new contract, Jones will continue to develop and be able to challenge for a starting spot, which could see him challenge any new additions in upcoming transfer windows.

Jones’ renewal also secures Liverpool’s situation when it comes to homegrown and club-trained slots in their Premier League and Champions League squads.

Another talented Scouser with an affinity for the club, it should be seen as a real positive that Jones is set to stay long into the future.