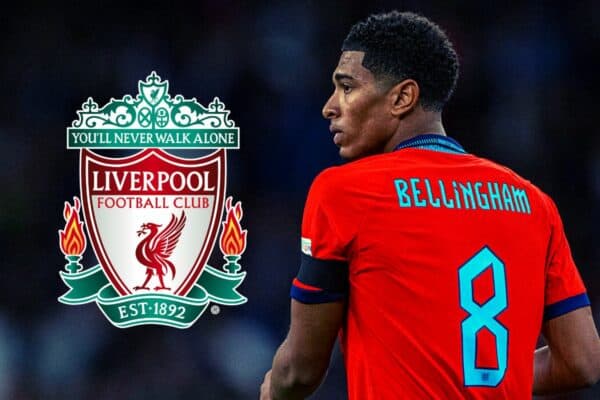 Liverpool could spend “up to £200m” on midfield, with Bellingham “perfect”

Jude Bellingham is one of a number of midfielders who continue to be linked with a move to Liverpool, with Jamie Carragher suggesting it could take £200 million to resolve Liverpool’s issues in the centre of the park.

The Reds head into the mid-season break for the World Cup in sixth position in the Premier League, having only won six of their opening 14 league matches.

That, after a season where Jurgen Klopp‘s side were two games away from completing an unprecedented quadruple of trophies, has been underwhelming.

Many believe one of the main reasons for Liverpool’s struggle for form has been the need for an injection of quality in midfield.

Ex-Reds defender Jamie Carragher is one of those who goes along with that theory, and says that despite his hefty price tag, Borussia Dortmund and England star Bellingham would be a worthwhile investment.

“The issue is that the players don’t have the energy to play a full game at the intensity they’ve played at in previous seasons,” Carragher said on The Overlap.

“Teams are now matching their energy, but this isn’t something that Liverpool has adapted. The Arsenal game was a fine example of this – when they played Liverpool off the pitch in the second half – and that is why I can see Liverpool spending up to £200m on their midfield in the summer.

“Jude Bellingham would be the perfect fit, but he would be a lot of money. When Liverpool have spent big money in the past, it’s been on the goalkeeper and Virgil Van Dijk, who were bought in at great age profiles.

“Signing Jude Bellingham would be for a lot of money, but it would get to two years down the line and people would see it as a bargain. At his age, you’d have him for at least five seasons before he’d move on, which is a great investment for the club.”

Liverpool’s upcoming transfer business could be complicated by Fenway Sport Group’s decision to search for new investors, or perhaps even sell the club to new owners.

Carragher believes FSG have done “a great job” with limited resources at Liverpool, and says he was initially surprised when he heard the news that they could be looking to sell the club.

“Fenway Sports Group have done a great job at Liverpool,” he continued.

“They’ve never proclaimed to have the funds like Manchester United, Manchester City or Chelsea, but these are the owners who brought the Premier League back to Liverpool, they brought in Jürgen Klopp, Anfield and the training ground has been transformed, and they’re almost a model for teams like Arsenal who were in similar situations.

“I am surprised they’ve put the club up for sale and maybe there is something in the fact that Liverpool have never been more attractive with the position they’re in, but we don’t know why they’ve done it now.”