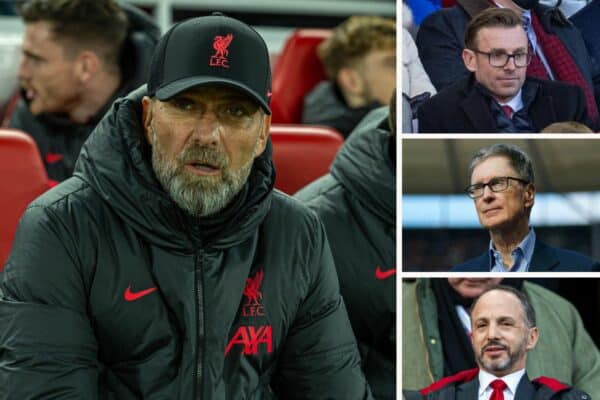 Liverpool’s great success during the Jurgen Klopp era has been built on stability, but the increasing lack of it is worthy of genuine concern.

Remember when everything was going so smoothly at Anfield?

Liverpool won the Champions League and Premier League, the owners were going under the radar and Michael Edwards was working miracles in the background.

The Reds consistently nailed signings, from Sadio Mane and Mohamed Salah, to Virgil van Dijk and Alisson, to Fabinho and Gini Wijnaldum – and silverware came the team’s way with delightful regularity.

This season has been different, though, and while injuries, ageing players and poor form have played their part, a time of change off the field has felt problematic, too.

All change at Anfield

Almost from nowhere, Liverpool have gone from feeling like one of Europe’s most stable and sensibly-run clubs to something alarmingly different.

FSG are now looking to sell up following a 12-year reign that has resulted in positives and negatives, while on Thursday, it was revealed that Julian Ward would be stepping down from his role as sporting director.

The 41-year-old has barely settled into Edwards’ office surroundings since replacing him in the summer, with his decision described as “unexpected and disappointing”, following over a decade at Liverpool in various roles.

It is a piece of news that feels pivotal, considering Ward was seen as the ideal replacement for Edwards, but his imminent exit suggests that all is not right.

If not, why leave in such surprising circumstances?

Director of research Ian Graham – a very key component in the transfer successes early in Klopp’s reign – has also resigned, while FSG president Mike Gordon – aka ‘the man who runs Liverpool’ – is said to be stepping back from his responsibilities to focus on the sale of the club.

So many significant changes at the same time feels problematic for Liverpool, not least when it comes to their style of recruitment and the brilliance of those in charge of it.

So much success has been achieved with their ‘Moneyball’ approach, with stats experts and analysts proving to be huge assets who are the envy of many.

There is also the small matter of Liverpool not having a club doctor throughout this season, which feels almost unfathomably amateur.

Indeed, Jim Moxon’s sudden decision to leave his role in August is said to have taken many staff members by total surprise, and it is hard not to look at the injury problems and not at least wonder if the two go hand-in-hand.

Suddenly, the all-conquering Liverpool that worked so seamlessly for so long is being altered in one seismic shift, and it leads to worries about what happens next.

Key decisions to be made

Klopp being in charge has always been the key reason for Liverpool’s return to the top of English football, but he has been helped along with so many experts in their respective roles.

The German has been a miracle worker, especially considering he hasn’t been given the transfer funds of rival managers, but he is still only as good as the team he is working with.

This sudden glut of exits is unlikely to make Klopp’s job any easier, though.

How will he fare without Ward, the driving force behind the signings of superstar duo Luis Diaz and Darwin Nunez? Will the feeling of change leave him unsettled?

Of course, going overboard in terms of negativity would be unwarranted, considering the club have largely made good decisions in recent years.

It could be that a sporting director of Edwards and Ward’s ilk comes in and the recruitment process stays the same, with increased responsibility for Klopp in that area helping get the right players in.

The Telegraph‘s Chris Bascombe has claimed that Liverpool “believe the backroom team of analysts assembled by Edwards and Ward will ensure there will be no disintegration”, which is encouraging – frankly, it would make no sense to alter anything.

The eventual new owners will also hopefully be more willing to spend big than the naturally cautious FSG, allowing Liverpool to compete with their rivals financially.

There is no doubt that the current feeling is one of worry, however, because a glorious spell at Anfield has been built around those departing.

As long as Klopp is in charge, magic can continue to be created, but the Reds have to be extremely careful that their successful approach is not axed and that a return to the pre-2015 days don’t occur.

If that happens, and the manager eventually moves on in 2026, trepidation would be wholly understandable.

For now, Liverpool need to act quickly to install a new sporting director, because their to-do list is already sizeable.