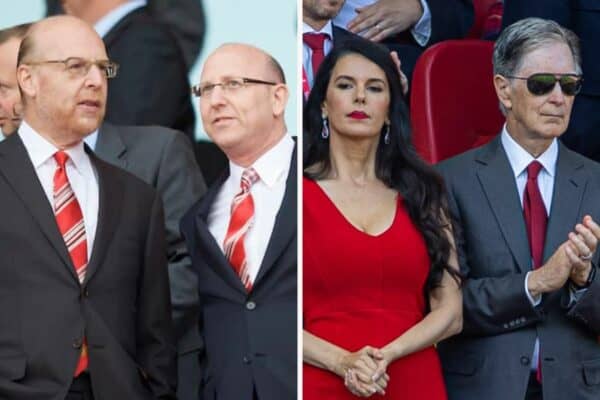 With Fenway Sports Group open to selling Liverpool, Man United‘s owners, the Glazer family, have now confirmed they will also “explore strategic alternatives” in what has been called an “unprecedented” situation.

Earlier this month, it was revealed that FSG were considering new investment for LFC and would not rule out a full sale.

Tom Werner has since confirmed they are exploring all avenues, but said there was “no time frame” on any potential takeover.

Man United‘s official line is a similar one, with a statement from the club on Tuesday evening, hours after it had been announced that Cristiano Ronaldo’s contract had been terminated, claiming that the Glazers would consider “investment into the club, a sale, or other transactions involving the company.”

It would seem unlikely, then, for this to be a coincidence, with many pointing out how the collapse of the European Super League could be one of the reasons why American owners are looking to sell up now:

Manchester United and Liverpool exploring new investment options – including an outright sale – at the same time… ?

Unprecedented! A nod to the belief that the value of big clubs is nearing its peak, amid tough global economic forecasts, and the ballooning cost to compete?

Liverpool and Manchester United on the block at the same time creates an interesting sales dynamic. Similar profile chasing similar investment, in a relatively narrow pool, with fans (local at least) who will heavily scrutiny potential buyers.

? "It may not be a coincidence that Liverpool and Manchester United are potentially up for sale at the same time."@MarkKleinmanSky feels the fallout of the "European Super League" may play a part in the American owners wanting to sell English clubs pic.twitter.com/xtK6j9WvYe

Raine Group, who oversaw the Chelsea sale, is acting as #MUFC's exclusive financial advisor. This is significant. The Glazers, like FSG at #LFC, saw the Chelsea sale and realised there was a strong range of suitors with an appetite to buy a Premier League club for billions.

First Liverpool, now Manchester United. Failure to get the European Super League off the ground, arrival of Saudi Arabia at Newcastle & price paid for Chelsea (+ amount of interest) have all played major roles in both now being for sale. https://t.co/KtF0U1a18f

The Glazers have received more criticism than FSG for their ownership style and the lack of progress being made at United in recent seasons.

The Americans bought the club for £790m in 2005 and, like FSG, look to have decided that now could be an ideal time to cash in.

Aside from the collapse of the Super League, a project that would have delivered more guaranteed revenue to United, Liverpool and the rest of Europe’s top clubs, it’s widely speculated that the spending power of the likes of Man City and Newcastle could be behind FSG’s and the Glazer family’s decision to explore sales now.

Sky Sports have reported that United are valued at around £5 billion and, should they be sold, it would likely be to US investors.

How might all this affect Liverpool and any potential new takeover? That remains to be seen. But with English football’s two biggest clubs now up for sale, it’s abundantly clear that things are changing in the Premier League.