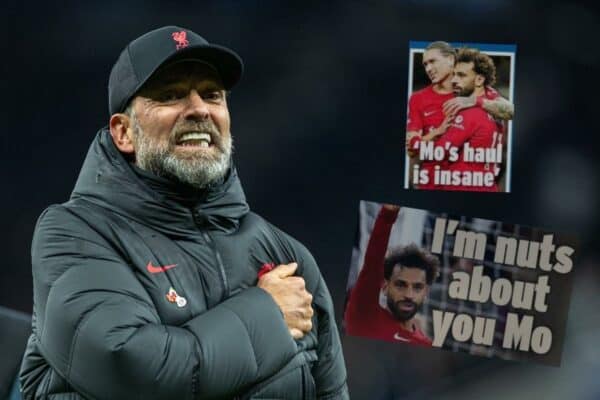 It was a game of two halves for Liverpool in their 2-1 victory over Tottenham, with the watching media praising the grit to “dig deep” and take an important step forward.

Jurgen Klopp‘s team knew how vital a win would be on Sunday afternoon, in terms of the increasingly intense battle for Champions League football.

Liverpool delivered a patchy performance but a priceless three points, with Mohamed Salah netting twice to seal the win.

It means the Reds finally have an away victory in the Premier League this season and this will hopefully act as a catalyst was some much-improved form.

Here’s how the media reacted to Liverpool’s triumph.

It wasn’t pretty, but Liverpool secured a massive three points…

The Guardian‘s Jacob Steinberg praised the Reds for grinding out the win:

“This was Liverpool remembering how to dig deep. In the end, Jürgen Klopp had Mohamed Salah on his own up front, a back five keeping Tottenham at bay and Alisson punching cross after cross away.

“It was desperate stuff and when the final whistle blew Klopp could march over to the away end to celebrate with the travelling support, who were ecstatic after watching their side hold on for their first away win in the league this season.

“Liverpool will hope this marks a turning point after a strange few months.

“They were impressive in the first half, establishing a lead through two ruthless strikes from Salah, and were defiant when Harry Kane pulled a goal back for Spurs.”

Ian Ladyman of the Daily Mail was another who focused on the ugly side of the win:

“Liverpool led 2-0 nil at half-time here and to those who watch Tottenham play regularly, it’s a familiar pattern. This was the sixth successive game Tottenham have trailed and indeed the thirteenth time in 20 games in all competitions this season.

“Oddly it’s a habit Liverpool know all about too. They have also suffered this way over the course of what for them remains a very strange season. But here two Mo Salah goals, early and late in the first half, gave Jurgen Klopp’s team enough of a buffer to withstand a second half Tottenham revival that was still developing momentum when the final whistle was blown on 94 minutes of play.

“Liverpool defended for their lives from that point on. But Klopp’s players showed a tenacity and organisation they will need if they are to turn this season round once the World Cup is out of the way and ultimately this was a first Premier League away victory of the campaign and one they just about deserved.”

The Athletic‘s James Pearce took to Twitter to laud a brave effort by Liverpool:

FT: Spurs 1 #LFC 2: Huge lift for Liverpool after their recent struggles domestically. Defended bravely and rode their luck to survive a late onslaught from the hosts after Kane had pulled one back. Salah's first half double proved enough to secure a big 3pts. Step forward

The Mirror‘s Samuel Meade believes it could be a big moment in the Reds’ season, as they finally won on the road:

“Liverpool have come up short at the City Ground, Craven Cottage, Goodison Park, Old Trafford and the Emirates but finally picked up three points on the road at the sixth time of asking. Klopp has overseen a poor start to the campaign, but his team have particularly struggled on the road.

“The Reds put themselves in a commanding position after a clinical first-half and had to weather a Tottenham storm in the opening stages of the second 45. Liverpool hadn’t even taken the lead in an away game this season, so taking the initiative was a positive first step.

“Aston Villa and Brighton are next up for the Reds on the road and getting the away day monkey off their back, albeit much later than they’d have wanted, is a major boost for their season.”

It was hard not to give Salah special attention…

Sarah Rendell of the Telegraph hailed the Egyptian King, as his superb record against rivals continues:

“For a must-win game along came Mo. Whether Liverpool actually deserved to win this encounter was a moot point but two sharply-taken first-half goals from Mohamed Salah were enough to reignite their hopes of finishing in the top four.

“Jurgen Klopp joked that Salah had scored “400 goals” against Spurs (in fact it is now just eight) but the forward certainly has an impressive record against other so-called ‘top six’ sides.

“It is 44 goals for him against that calibre of opposition.”

This Is Anfield‘s Mark Delgado also showed his appreciation for Salah:

“Mo was one of our better performers in the spell of the season we’ll refer to as the four-man midfield month, encompassing 4-4-2 and the diamond.

“Even so, and with the goals he got from being in a two-man attack, he did make reference to preferring the 4-3-3 and his usual right-sided role.

“Small wonder, then, that he impressed again in buildup play and with his finishing when restored to that flank in Premier League play.

“Salah has been a regular Golden Boot winner or contender, though wasn’t even in the top 10 ahead of this weekend’s games due to the Reds’ inconsistent showings.

“Two more takes his tally to six for the league campaign (joint-top for us with Roberto Firmino now) and to 14 in all competitions, highlighting how he remains the man we must make the most of when it comes to deciding exactly which tactical approach, more than just formation, to employ on a regular basis.”

“How’s that for a big contribution in a big game? When Liverpool needed a hero, the man who delivers so often for them delivered again.

“Salah’s first-half double, both goals clinically taken, gave Klopp’s side a lead they would hold on to for dear life, and showed, once again, why the Egyptian is still the Reds’ best and most decisive player.

“He has 14 goals in all competitions this season, and he had ice in his veins as he twice left Hugo Lloris and the Spurs defence stranded before half-time.

It was a big day in the top-four race…

Jones believes the spirit on show suggests the Reds are very much in the fight:

“Right then, is this the game which finally gets Liverpool’s Premier League season going? The Reds have their first away win of the league campaign, and a huge one too, as Mohamed Salah’s first-half brace saw them beat rivals Tottenham on a day when defeat may well have spelt the end of their hopes of a top-four finish.

“Instead, Jurgen Klopp’s side move to within seven points of Spurs, who occupy fourth spot. Liverpool also have a game in hand, and had been buoyed earlier in the day by defeats for fellow Champions League hopefuls Chelsea and Manchester United.

“Most importantly for Klopp were signs that the spirit and courage of his side, questioned regularly during the opening weeks of the campaign, is starting to return.”

“The Reds face Derby in midweek which, given injuries, form and priorities elsewhere, is now quite the curiosity at least, before we then face Southampton in our last Premier League game.

“That one’s at home and they may well have a new manager in place by then; if we win and results go in a reasonable fashion elsewhere, we could at least be back in European places when the league takes its leave.

“Albeit not a European place we actually want to finish in, obviously.

“Finish with four straight wins across all competitions and maybe we can look forward with cautious optimism.”