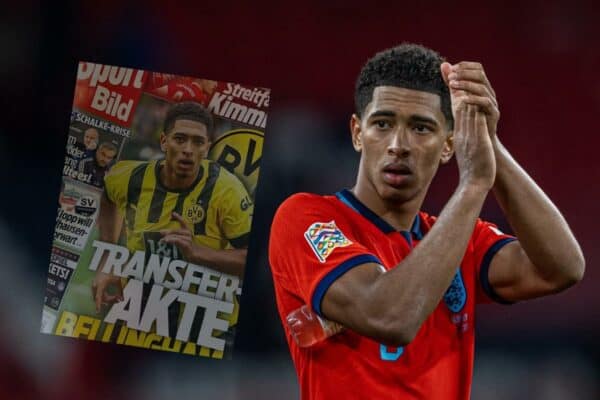 Jude Bellingham’s future is readily speculated and Liverpool are in the conversation and ready to ‘attack properly’ – but may still be short of Borussia Dortmund’s price tag.

The Reds’ midfield contingent has long been under the microscope but arguably none more so than the present after failing to address the needs during the summer.

The belief of many is that the club are waiting for the availability of Bellingham, but they’re not the only European club vying for the 19-year-old’s coveted signature.

Real Madrid are in the reckoning while Chelsea and Man City are readily name-checked too, and for Liverpool, he’s a name that feels firmly at the top of the wishlist.

And now German outlet SportBild have reported that Jurgen Klopp and director Mike Gordon have agreed to “attack Bellingham properly” as the “face of the future” for the club.

Not quite all in as the report suggests, then.

Liverpool will have to be prepared to pay a premium for the 19-year-old as Dortmund will welcome a bidding war, not to mention still have the Champions League to offer him.

Sky Sports’ Melissa Reddy has said Liverpool have “put in the heaviest work over a long period behind the scenes to pierce the player’s decision-making process.”

However, the question is will they be prepared to spend in excess of £100 million for one player when other signings are needed to freshen up the squad?

If they’ve put all their eggs in one Bellingham-sized basket, the answer will have to be yes.

Liverpool have the ability to finance a deal but plenty will rest on making a convincing case for Bellingham to join amid other pitches from Real Madrid and, no doubt, City.

This is still only the start of the transfer rumour mill, we’ve got months left before it reaches its conclusion.