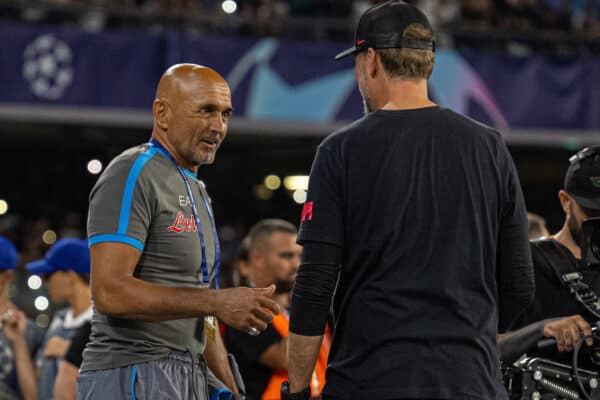 Napoli manager Luciano Spalletti has warned his players to “not be fooled” by Liverpool’s recent setback, with a 23-man squad travelling to Anfield.

Spalletti has made a remarkable impact at Napoli, steering them to third in his first season last time out and, so far, overseeing an unbeaten start to 2022/23.

The Italian side sit top of Group A heading into the final game against Liverpool on Tuesday night, though a four-goal defeat would see them relinquish that spot to the Reds.

It is an unlikely scenario, but in his pre-match press conference, Spalletti insisted that he would “not be fooled” by the 2-1 defeat to Leeds at the weekend.

“Liverpool are a team in great health,” he said, as reported by Yahoo.

“Let’s not be fooled by the result of the last match, which I have watched as well as the previous ones.

“I find Liverpool the same as always.

“It is clear if they miss 10 goals in front of the goalkeeper and by chance everything goes wrong, as in their last game, a result can be questioned.

“But teams like Liverpool, Manchester City, Chelsea, they have the best footballers in the world, here in the Premier League, and we come to gamble against them.”

Napoli flew to Merseyside on Monday afternoon, and trained at Anfield later that day, with Spalletti able to select from a strong, 23-man squad.

There are no notable absentees, with joint-top scorers Khvicha Kvaratskhelia and Victor Osimhen both making the trip to England after a 4-0 victory over Sassuolo at the weekend.

Osimhen netted a hat-trick in that win and is set to lead the line, with Kvaratskhelia to start on the left wing as he enjoys a stunning debut campaign that has seen him score eight and assist 10 so far.

Portuguese left-back Mario Rui took press conference duties alongside Spalletti on Monday and is therefore likely to start, along with the likes of Piotr Zielinski, Frank Anguissa and Hirving Lozano.