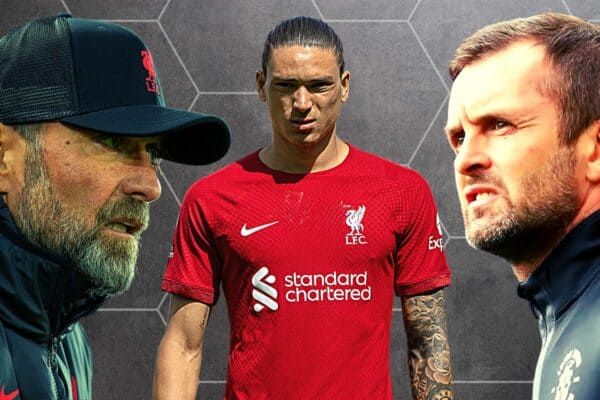 Southampton will be hoping for a new manager bounce when they face Liverpool on Saturday, as the Reds look to finish the first half of their season in style.

He’s since been replaced by Nathan Jones, who arrives from Luton, and will be in charge when Liverpool host the south coast side in what is their final game before the World Cup break.

Only victory will do for Jurgen Klopp‘s men, as they look to follow up last Sunday’s 2-1 win at Tottenham.

Ahead of Saturday’s game, we spoke to Saints fan and writer Luke Osman (@lukeosman_) to discuss Hasenhuttl, Jones both teams’ seasons and more.

How would you assess Saints’ start to the season?

When Romeo Lavia has been fit, the team has functioned reasonably well and progressed the ball through the thirds, but in his absence, the performances have been really turgid.

Such reliance on an 18-year-old, coupled with a lack of a quality forward player at the top end of the pitch, culminated in the start to the season tailing off after a really positive first five games.

Ultimately, the nature of some of those defeats has cost Hasenhuttl his job.

Was it the right time to sack him?

No – it should have happened sooner.

The club opted to totally overhaul Hasenhuttl’s coaching staff in the summer to give him a final opportunity to prove that, with a refreshed squad and setup around him, he could arrest our decline since March.

Sadly, in retrospect, the summer was the right time to thank him for his efforts and bid farewell.

It became apparent fairly quickly this season that things had gone stale, as is often the case with managers who spend a really respectable four years at a Premier League club.

Many fans believe the trigger should have been pulled after the 2-1 home loss to Everton last month, but the decision has been delayed, and with Saints now 18th, a price has been paid.

Are you happy with Nathan Jones as his replacement?

I think it’s an incredibly big risk. He’s worked wonders at Luton and deserves enormous credit for that, but his time at Stoke worries me – six wins in 38 is hard to ignore.

I don’t think it’s much of a stylistic deviation from how Saints played in the earlier days under Hasenhuttl, in that there will be an emphasis on intense work off the ball, a clear structure with and without possession as well as an emphasis on counter-attacking, but these examples from Jones only come in the Championship.

His temperament has made him somewhat disliked amongst plenty of fanbases, so that could be quite an interesting mix here as he’s walking into an environment that’s been fractured and divided for quite a while.

Given how drawn out the process of replacing Hasenhuttl appeared to be, all while he was still in place at the club, I’d hoped for better than Jones, but now we have to back him.

Armel Bella-Kotchap and Lavia, both signed in the summer, are two of the most promising talents in the Premier League.

They have both taken to life in the division remarkably well and they’ve been Southampton‘s shining lights.

A fair few players have been poor this season – probably too many to name – but James Ward-Prowse, despite not performing as badly as some fans have suggested, has been way below his usual level.

Oriol Romeu’s departure has hit Saints hard, but nobody has been affected quite as evidently as Ward-Prowse.

Totally bizarre, as represented by their recent streak of results.

Whereas Liverpool were once so reliable, losing at home to Leeds before beating Napoli and Tottenham is sort of par for the course now.

There have been factors that have made things hard for Klopp, but some tactical decisions this season have been counter-productive, such as the positioning of Trent Alexander-Arnold and Mohamed Salah – two players who have been pivotal to the team’s past success.

Liverpool can, and will, still beat anyone on their day, as the Man City win reflected, but there is a sense of vulnerability now and it’s clear that they aren’t what they were even last season.

I think Liverpool will still creep into the Champions League – they’re too good not to.

City and Arsenal are the only two sides that are nailed-on, I would say, and I fancy the Reds to catch up to Chelsea, Tottenham and Man United and give it a good go.

As for Saints, right now I’d say there aren’t three teams worse than us.

I currently think we’re down, probably in 18th, but if we go and sign a high-level attacking player in January and Jones proves me wrong, as I really hope he does, then we might be okay.

I’m not too optimistic, though, sadly!

Which Reds player would you most like to have at Saints currently?

Virgil van Dijk is the best player I’ve seen at Southampton, but you’d have to say Salah.

We are beyond wasteful in front of goal and he is as good as anyone when the chances present themselves, so that’s an easy one this time around.

We don’t have a fixed right-back, with Tino Livramento and Kyle Walker-Peters out, so whoever plays on the left for Liverpool could have some joy.

I like Darwin Nunez drifting out to the wing, and if he’s up against Ainsley Maitland-Niles, Mohamed Elyounoussi or Lyanco – and no-one knows who it will be – I can see him causing some serious issues.

I will go for a slightly reserved 2-0 defeat.

All I hope for is a gutsy performance and one that can inspire a bit of confidence as we head into the World Cup break.

The last thing anyone needs is a heavy loss, especially as it’s Jones’s first game, but we all know what Saints are like.