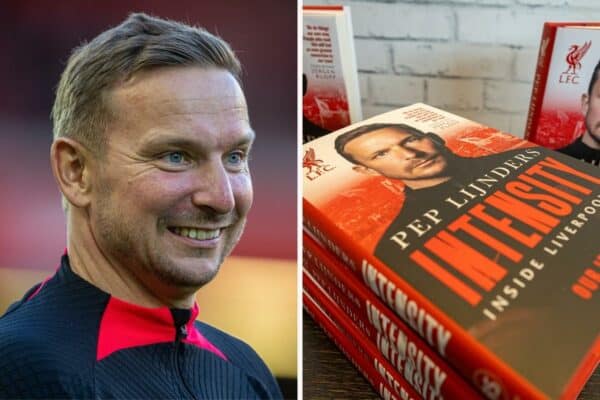 Pepijn Lijnders has been criticised for releasing a book while still operating as Liverpool assistant manager, but he insists it has dealt no harm.

Lijnders released the book ‘Intensity: Inside Liverpool FC’ at the start of August, and it was initially met with a positive response from supporters.

But with Liverpool struggling throughout the campaign so far, poor results on the pitch have led to questions over the wisdom of publishing an insider’s view of the club while still active.

It has, at the least, led Lijnders to become the butt of the joke on occasion.

However, when asked about the impact of his book on Liverpool’s success, the Dutchman insisted that he had “no regrets” and that, when it comes to fuel for their rivals, there is “not as much as people say.”

“First of all, no regrets. I enjoyed every word, everything that was written down,” he told reporters on Tuesday.

“The moment it was published, for me it was done, it was the past. I didn’t have any interest, to be honest, because new season, new problems, blah, blah, blah.

“I hope that people enjoy it. I know that a lot of people do, to be honest, because inside and outside [the club] I get good reactions.

“But you guys know really well, if you write something there will be people who like it and people who don’t like it!

“That should never stop you from doing these things, in my opinion.

“I’m proud that there’s a book that gives inside information – not as much as people say, that would harm [us], there’s no relationship with that.

“I hope that fans could read the admiration I have for this club, the feeling for the team, the love for Liverpool. If it inspires a few, I’m really happy.

“And if you don’t know what to give for a Christmas present, please buy it for your bitter uncle!”