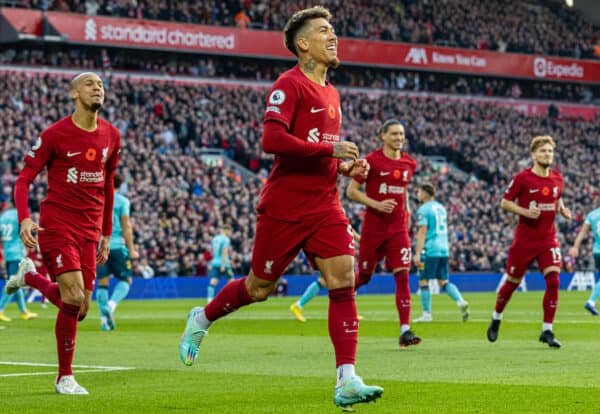 As an unwanted winter break descends upon the club game, Liverpool are now handed over six weeks of self-reflection. While back-to-back Premier League wins and a place in the knockout stages of the Champions League are very welcome, there are still some rough edges to work on.

There are plenty of positives for Jurgen Klopp to be running with from Saturday’s victory over Southampton.

Restricted to a seat in the director’s box due to his one-match touchline ban, the sights of a majestic Alisson, a confidently dominant Darwin Nunez, and a pillaging Andy Robertson will have been particularly warming for the Liverpool manager, to go along with three points that were enough to lift his team into the top six.

Early season inconsistencies, recent losses to Nottingham Forest and Leeds, Southampton rolling into town with a new manager in place, and an equaliser shipped in under 10 minutes – there was every reason why Liverpool could have stumbled once again in this one.

A vital victory at a vital time

With a 43-day wait for our next league fixture, it was massively important for Liverpool not to yield any further ground on Saturday.

Lose your last game before an enforced hiatus of a month and a half, and that can only deliver you with a long time to reside beneath an uncomfortable cloud.

Swings and roundabouts, though. Had we not been confronted with an ill-devised World Cup, then the remainder of November would be populated with assignments against a new manager bounce Aston Villa, a suddenly regenerating Leicester, a Brentford side that has just enjoyed the adrenaline boost of a win away at Man City, and a League Cup trip to Pep Guardiola’s irritated vanquished champions.

As annoying as it is for the season to now go into stasis, given the players we are missing, it might be a turn of events that subtly plays into our hands.

Instead of throwing the same set of players at a quartet of testing games, instead, we now get to work on the hopeful return to fitness of those who have been absent recently, thus providing Klopp with a wider squad to select from once the league season recommences on Boxing Day.

In addition to this, a sizeable number of key players will largely be able to balance rest and recuperation, something that will represent a complex balancing act.

The danger of too much downtime will be the task of rising to competitive matchday levels from the word go on December 26, something that might come easier to players who have been in action in Qatar. The variables will be myriad beyond the World Cup, and the landscape will certainly be unique.

Momentum is everything in football, but that applies for our opponents as much as it does for us. The trick will be ensuring that the stoppage in proceedings doesn’t soften existing resolves.

There will undoubtedly be teams that will reach the end of the campaign, only to point to the World Cup themed winter break as being a season killer. For instance, imagine being Arsenal right now, only for the break in play to prospectively be the fork in the road where fortunes turn against them. It would take a lot to get over it.

When we are reunited with Southampton on the final day of the season six and a half months from now, we need to be looking back on the World Cup as having done us a favour or two, as we attain the goal that we set for ourselves from here.

On Saturday, Liverpool were excellent going forward, especially in the first half. Nunez looks at home on the left-hand-side of a front-three and is clearly rising in confidence.

Moved from the centre, a little of the pressure has been removed from his shoulders, and another two goals were claimed by the World Cup-bound Uruguayan, upping his quota to an average of a goal a game.

The esoteric of thought, the presence of mind, the one-touch technique – his first goal was particularly magnificent, and an almost jarring juxtaposition to the bludgeoning force that he can be cast as at times.

The task for Nunez will be transplanting that effect to a central role once Luis Diaz and Diogo Jota return to fitness, but he has now illuminated an alternative role that he can carry off adeptly, bringing Bobby Firmino back into play.

With Mo Salah alongside them, there is a growing symbiosis to this trio, and on another day, the Egyptian King would have had a goal and a penalty of his own.

There were other heroes on Saturday, with Robertson in prime creative mode, contributing two more assists to his incredible repertoire, while Alisson made three significant saves on a day when his central defence were a little too generous with the space they afforded the visiting attackers.

Positives are there to see, but there are still negatives to work on. We are a little too slack when out of possession, and not as sharp as we can be when in possession.

As we now grind to a halt, frustration will visit every team and their fanbase, as they wait impatiently for the recommencement of league football, but for some, the break will be more unwelcome than for others.