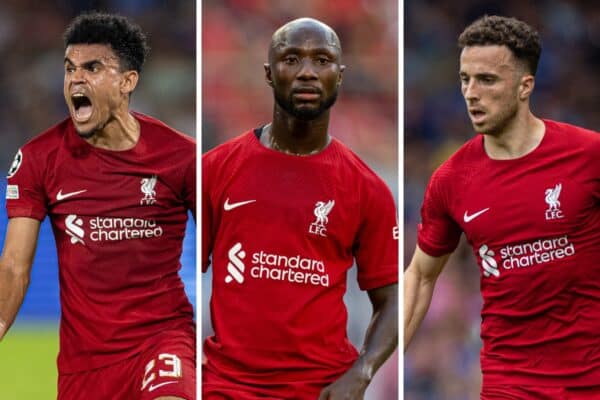 With just seven Liverpool players heading to the World Cup, it will be a welcome break for those recovering from injury, as three near a return.

Liverpool’s injury list has a frustration this season, but a five-and-a-half-week gap for the World Cup could provide a useful break to get almost everyone back fit for 2023.

Liverpool won’t play competitively again until December 22, but during the World Cup the Reds will be flying to Dubai for two friendlies against Lyon and AC Milan.

The matches, taking place on December 11 and 16 respectively, are an opportunity for those who have been out injured to regain some match fitness ahead of a packed winter schedule.

Joel Matip, Naby Keita and Luis Diaz are among those who are expected to play some part in the fixtures having been out injured recently.

For two others, though, it will be a longer wait.

The Colombian was Liverpool’s shining light in the early stages of the season but Diaz hasn’t featured since injuring his knee in a challenge with Arsenal‘s Thomas Partey over a month ago.

Initial fears that he may need surgery didn’t come to pass, and Jurgen Klopp is optimistic about him returning slightly earlier than expected.

Before the 3-1 win over Southampton, the manager said: “Lucho is now running outside, he looks really good.”

The 31-year-old hasn’t been out as long as Diaz and there’s more cover at centre-back than on the left wing.

Nevertheless, Matip will be needed regularly in the coming months and Klopp revealed his return to training prior to the victory over Southampton.

Even by his standards, Keita’s season has been plagued by injury.

He hasn’t played since the Community Shield win over Man City at the end of July and his injury status hasn’t always been made clear.

A combination of hamstring and thigh injuries has hampered his recovery, but Klopp said last week that he’s now “out and running.”

Who won’t make it?

While he will travel with the squad to Dubai, there will be no involvement for Diogo Jota.

Earlier this week, The Athletic’s James Pearce claimed that the Portuguese is expected back “in late January or early February.”

However, assistant manager Pepijn Lijnders has detailed the benefit of Jota reporting for warm-weather training, speaking to the club’s official website.

“The conditions to train and recover in Dubai are just very, very good,” Lijnders said.

“A change of scenery is always a welcome factor when recovering from a long-term injury.”

Meanwhile, Arthur is also expected to remain out for an indefinite period after undergoing surgery last month, having played just 13 minutes of first-team football.