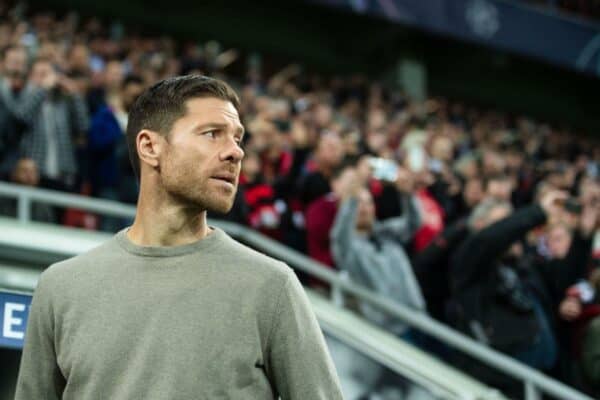 After being appointed Bayer Leverkusen’s new boss in October, Xabi Alonso looks to have settled in well to his first job in senior management. Here, we take a closer look at his progress.

The iconic ex-Liverpool midfielder had previously been in charge of Real Sociedad’s B team, before Leverkusen gave him the opportunity to showcase his coaching ability at first team level.

Prior to his arrival, the Bundesliga outfit had gone four league games without a victory, with previous manager Gerardo Seoane sacked after a 2-0 Champions League defeat to Porto.

Alonso’s first match was a 4-0 victory over Schalke, before he went on to win four of his first seven league matches in charge before the World Cup.

Leverkusen finished third in their Champions League group behind Porto and Club Brugge, meaning they will drop down to the Europa League in the second half of the season.

To get an insight into Alonso’s time at Leverkusen so far, This Is Anfield spoke to Bundesliga expert Ronan Murphy (@swearimnotpaul) of Football Transfers (@Transfersdotcom).

A respectable start for Xabi at Leverkusen – what have you made of the job he’s done so far?

Alonso told me himself that he welcomed the early winter break because it’s been such a “rollercoaster” so far.

He’s barely had time to breathe at his new club, never mind properly integrate his systems and tactics.

But overall, the signs are positive and it seems a good appointment from Leverkusen.

What style of play does he look to be implementing?

He hasn’t changed things hugely so far, as the talent they have in attack and out wide lends itself well to counter-attacking fluid football.

He’s gone with three at the back, using Jeremie Frimpong and Mitchel Bakker at wing-back, and the latter looks a much improved player when given the freedom allowed by Alonso.

He has some interesting young players in that squad – what has his use of them been like?

Moussa Diaby has been a key player for him so far, and has been a main provider of goals and assists.

Playing more centrally at times, he has more of a licence to pick up positions where he can burst through the defence and take his own chances rather than set up others.

Callum Hudson-Odoi isn’t currently in his preferred XI, but with Europa League games in the new year, rotation will give him more opportunities.

Frimpong is going from strength to strength and it’ll be hard to keep him at the club.

And do Leverkusen’s fans seem satisfied with his work so far?

Leverkusen fans are very pleased so far and optimistic about what the future may hold.

Some were actually disappointed they progressed in Europe as they would have preferred to focus on improve their league position without the distraction of midweek games.

Does he strike you as a manger that could go on to bigger things? Perhaps at Liverpool one day?!

He needs a lot more experience in top leagues and in Europe before he can be considered for a bigger job, but Leverkusen is the perfect platform for many players to go on to bigger things, so why not a coach too?