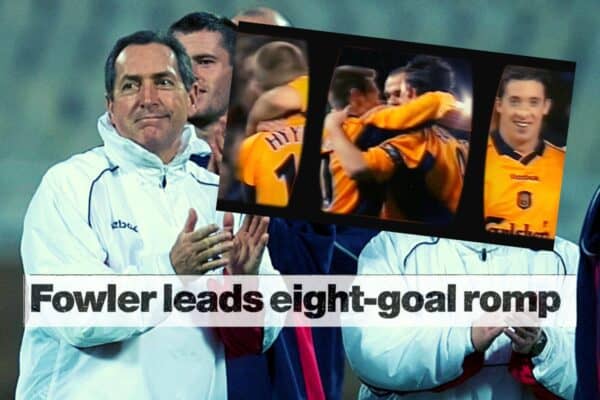 Liverpool have enjoyed some one-sided victories over the years, but on the road, nothing beats their triumphant 8-0 League Cup win at Stoke in 2000.

There was a very Nordic feel to the League Cup fourth-round clash at the Britannia Stadium on November 29, 2000, as Gudjon Thordarson’s Stoke hosted Liverpool.

A one-cap Iceland international, Thordarson was in his second season in charge of Stoke, and was overseeing an influx of Scandinavian talent on the Trent.

Among those was Norwegian defender Frode Kippe, who agreed back-to-back loan moves from Liverpool, though he was not part of the squad to face his parent club in what was at the time known as the Worthington Cup.

Liverpool had already seen off Chelsea in the third round at Anfield, with Danny Murphy and Robbie Fowler scoring either side of Gianfranco Zola, and were handed a plum draw when they were pitted against third-tier Stoke.

That allowed Gerard Houllier, now firmly settled in sole charge, to ring the changes from a 2-1 defeat to Newcastle three days previous.

Partridge made his Liverpool debut, to be followed by Stephen Wright off the bench, on an unforgettable night that saw Liverpool win 8-0 with six different goalscorers.

It may well have hinged on an early moment of madness from stand-in goalkeeper Arphexad, but with Stoke’s Peter Thorne wasting an open goal, the Reds soon took control.

Fowler, wearing the captain’s armband, laid on the first for Ziege, and after withstanding a brief assault on their goal, two more followed before the half-hour mark.

The first came from Smicer, before a first Liverpool goal for Markus Babbel from the second of three assists for Fowler.

Houllier’s No. 9 then got his first of a hat-trick of goals himself, nodding in after Finnish centre-back Sami Hyypia flicked on a corner.

Hyypia took advantage of Gunnarsson’s error to make it 5-0 just before the hour, with Fowler then making it a treble of assists as he set up Murphy.

Not content with a hand in four goals, Fowler then sealed his hat-trick with two late efforts, one from the penalty spot, as the Stoke fans sang in woeful irony.

Why, why, why, Delilah
So before they come to break down the door
Forgive me Delilah, I just couldn’t take anymore

Too late, the door had already been broken down, and with a record crowd in attendance at the Britannia, Liverpool produced their biggest-ever win on the road.

Even despite this, it was far from a flawless display from the Reds, with Houllier given much to ponder when it came to their errors at the back, not least from Arphexad between the sticks.

That was the Frenchman’s final appearance in what proved to be a historic season for Liverpool – Westerveld starting ahead of him in every subsequent game – with three trophies won including the Worthington Cup.

Fulham were beaten in the quarter-finals, before a 6-2 aggregate win over Crystal Palace in the semi-finals, setting up a meeting with Birmingham at the Millenium Stadium.

Victory on penalties on that February afternoon was followed by triumph in the FA Cup and UEFA Cup, with two more trophies – the Charity Shield and the UEFA Super Cup – to come before 2001 was out.

As for Stoke, it took another campaign before they earned promotion back to the First Division, with Thordarson’s contract allowed to expire in a turn of events that eventually saw Tony Pulis take charge for the first time.

Liverpool are yet to score eight goals in an away game since, though they have netted seven on seven occasions.

Home and away, that 8-0 thrashing of third-tier Stoke is the club’s joint-ninth biggest win in history.