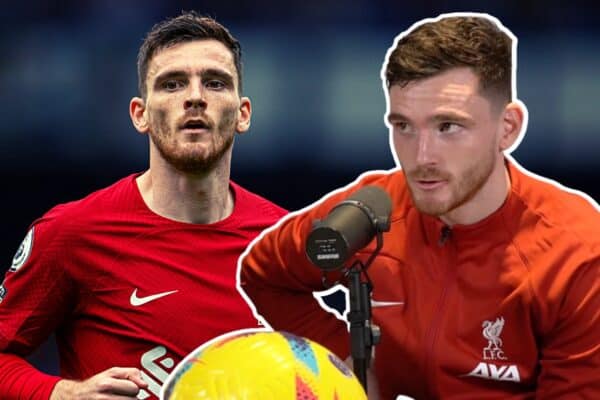 Asked to name his ideal 5-a-side team from the Liverpool squad, Andy Robertson pulled out a potentially surprising name as part of his midfield.

It is a popular topic among players and fans alike, streamlining a full squad into a 5-a-side team, and there is a variety of candidates at Liverpool.

The likes of Roberto Firmino and James Milner would be perfectly suited to an all-action, small-sided game, while the quality of Virgil van Dijk, Thiago and Mohamed Salah would shine through regardless.

In a recent interview with Pitch Side, Robertson was asked to put together his dream 5-a-side team from players he has featured alongside at Liverpool.

And while it included some of the more obvious names from Jurgen Klopp‘s squad, there was also one who has seen his role gradually decrease in recent years.

“I’d go Alisson Becker. I’m the captain, so I’m at the back, Virgil can sit on the bench,” he began.

“The only problem I’m worried about is the work rate – the three lads in front of me! Three attackers, so I’ve given myself a lot of work.”

From an outside perspective, it could be seen as a shock that Robertson would turn to Alex Oxlade-Chamberlain over the likes of Firmino, Trent Alexander-Arnold or Luis Diaz.

But it shows how highly the 29-year-old is regarded within the squad, and perhaps why Klopp has kept his faith in him despite injuries limiting his game time.

However, when it came to Robertson’s all-time 5-a-side team – including players he has watched as a fan – both Oxlade-Chamberlain and Salah dropped out.