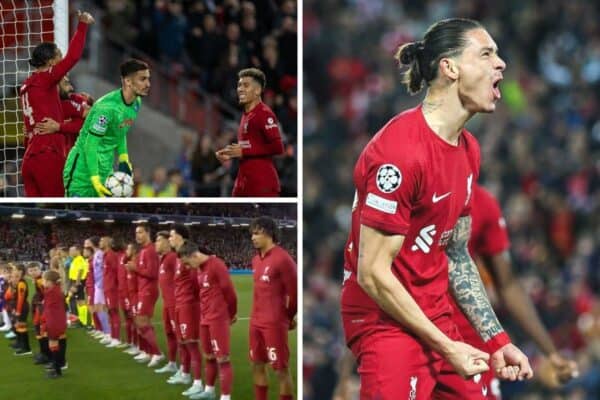 With Napoli unbeaten in 17 games heading into Tuesday’s game, it was more hope than expectation for Liverpool – but two late set-pieces handed the Reds a 2-0 victory.

With a place in the last 16 of the Champions League already secured and a limp defeat to Leeds last time out at Anfield, there were mixed opinions on how Tuesday night would play out.

Jurgen Klopp named a strong side, though, and largely dictated proceedings – with a goal for Mohamed Salah and Darwin Nunez tarnishing Napoli’s otherwise unblemished record this season.

Two goals short of finishing at the top of Group A, but Klopp saw the “reaction I wanted to see” from the players, who are capable of seeing “the real football we can play” return.

The winning feeling at Anfield was much-needed and fans had plenty to discuss after the match, including Thiago‘s heartwarming gesture and Nunez’s wild celebrations…

Love this from Thiago!

It was a wet and cold night at Anfield and the mascots lining up on the pitch were visibly shaking as they waited for the players to emerge from the tunnel.

As the players took their positions behind, Thiago noted the situation and gave his jacket to a young mascot so she could stay warm – file it under things you love to see.

Thiago giving his jacket to the little girl again???

And while at first hesitant as to what to do with the jacket after the UEFA formalities, in the end, she kept hold of the jacket – and rightly so. What a keepsake to have!

Nunez and the Kop

Darwin Nunez has endeared himself to Liverpool fans without any delay.

And his name was chanted from all four corners at Anfield from the moment he came onto the pitch to the last kick of the game – which happened to be his goal.

A ball of chaos, and a fun one at that – and Nunez certainly enjoyed celebrating Salah’s goal in front of the Kop:

Darwin Nuñez is mad as a box of frogs and I love him, hahahaha!https://t.co/3wG7J5pLje pic.twitter.com/KdvTX1nvgr

A player you can’t take your eye off, if you do you just might miss something mad…

Leaving Anfield. Decent game, decent win for Liverpool and no doubt about the star of the show – Darwin Nunez. My word he was electric, and not for the first time this season. Exciting to think how good he can be once fully integrated into a properly functioning team.

Darwin Nunez now has a goal or assist every 82.6 minutes for #LFC.

Wasn’t convinced at all early on, but coming round to him for some reason…? pic.twitter.com/MSoEmLkDk8

Stefan Bajcetic played only a small part at the end of Liverpool’s win, but his cameo showed the poise and efficiency that saw him catch the eye throughout pre-season.

He won both the tackles he contested, made two recoveries and won two of his three ground duels, not bad for a few minute’s work – and fans took notice…

Bajcetic won as many tackles in 10 minutes (2) as Fabinho did in 97 minutes.

Really wouldn’t mind seeing Bajcetic start a game, not seen him for long enough to really judge him but every time he comes on he’s everywhere as looks class on the ball

as soon as Klopp put on Ramsay, Bajectic and Carvalho we looked like a reenergised team and like the Liverpool of old. all this says to me is it isn't the tactics, it's burnout or complacency from some of our regular starters

Still just 18, Klopp has long been eager to manage expectations around his young players but Bajcetic has shown plenty of promise, so will minutes come his way against more than just Derby before the break?

In the space of three weeks, Liverpool have beaten Man City to inflict their first league defeat, lost to both Nottingham Forest and Leeds – both in the relegation zone at kickoff – and ended Napoli’s 17-game unbeaten streak.

It is the perfect embodiment of the Reds this season, inconsistent but still capable of the levels that took them to the precipice of history last season.

And as you can imagine, social media was not short on brilliant reactions…

Clubs in tatters but we’re the only team to beat City and Napoli pic.twitter.com/sB2VucRFLv

Liverpool ending the unbeaten records of Man City and Napoli, keeping clean sheets against both just to add that extra bit of stupidity to their already bizarre season.

Liverpool have ended the unbeaten runs of Manchester City and Napoli this season.

They are in anti-hero mood.

We're finishing 2nd in the group and still getting Porto pic.twitter.com/omltIYHX8U

So why not, indeed!

Why not Redmen..?
Of course we fucking can! pic.twitter.com/5eX58PHvCO

Up the rollercoaster Reds!