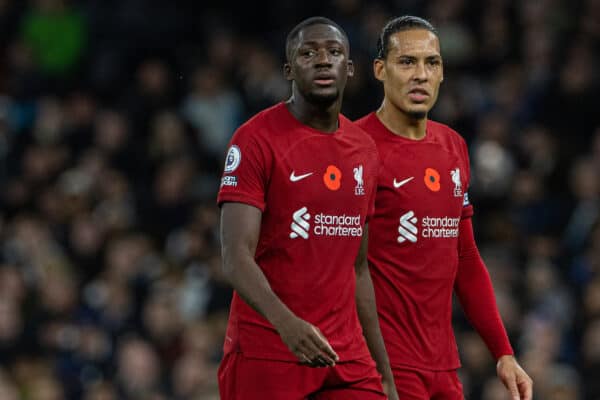 Tottenham 1-2 Liverpool: Player Ratings – What the media and statistics say

Ibrahima Konate and Mohamed Salah shone in Liverpool’s 2-1 win away to Tottenham, on a nervy afternoon in north London.

The Reds knew how priceless a win would be against Spurs and they achieved it by the skin of their teeth in the end.

Liverpool held on, however, despite their opponents’ best efforts, securing an invaluable win in the process.

Here we compare our player ratings with those of the Liverpool Echo, the Independent, WhoScored, FotMob and the This Is Anfield readers.

The world-class Salah (8.4) was the difference-maker at the Tottenham Hotspur Stadium, as his quality shone through yet again.

The 30-year-old’s two finishes were delightful in their own way, as he took his goal tally for the season to 14 goals and received the highest average rating.

The Independent‘s Karl Matchett described Salah’s two strikes as “tremendous,” adding that he was a “counter-attacking outlet” in the second half.

TIA’s Jack Lusby pointed out that the Egyptian now has nine goals in his last eight games – we just take him for granted at this point!

Ibrahima Konate (8.0) came in second place, following a dominant performance that saw him stand out as Liverpool’s best defender.

The Frenchman was made some “vital clearing headers,” according to Ian Doyle of the Echo, while Lusby claimed it is a “relief” to have him back fit.

Darwin Nunez (7.6) completed the top three, as he produced an industrious showing.

Lusby felt the attacker was a “dangerous” presence throughout, with FotMob noting that he registered an assist and made six recoveries.

The lowest rating went to Roberto Firmino (5.9), although the defensively susceptible Trent Alexander-Arnold (6.1) was arguably fortunate to avoid it.