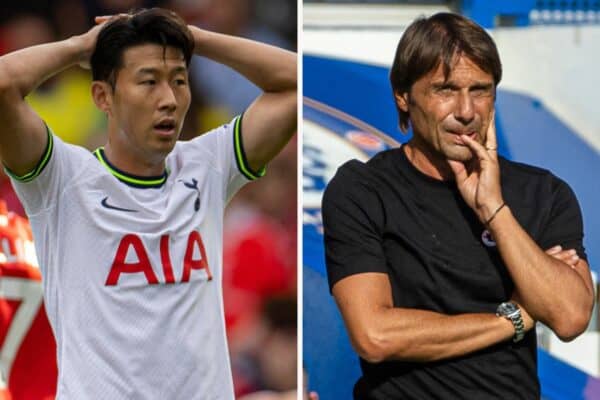 Son Heung-min will be unavailable for Tottenham when Liverpool face Antonio Conte’s side this Sunday, adding to their growing list of injury concerns.

The South Korean was forced off with a nasty-looking head injury in the first half of Tottenham‘s Champions League victory over Marseille on Tuesday.

And on Wednesday evening it was confirmed that Son had suffered a fracture around his left eye and would now undergo surgery, before a period of rehabilitation.

No timescale was placed on his return, but Liverpool’s visit to north London will surely come too soon for the forward.

“We can confirm that Heung-Min Son will undergo surgery to stabilise a fracture around his left eye,” a Tottenham club statement read.

“The South Korea international suffered the injury during the first half of Tuesday’s UEFA Champions League victory at Olympique Marseille.

“Following surgery, Son will commence rehabilitation with our medical staff and we shall update supporters further in due course.”

Son isn’t the only Tottenham player currently in the treatment room, with fellow attackers Dejan Kulusevski and Richarlison also currently unavailable for selection.

Sweden winger Kulusevski is recovering from a thigh injury, with Conte confirming he had suffered a setback in his rehabilitation last month, while Richarlison, who injured his calf against Everton several weeks ago, is currently in a race against time to be fit to take part at the World Cup with Brazil.

Defender Cristian Romero is another doubt, having missed Tuesday’s win at Marseille with a thigh problem.

Conte will offer an update on the injured quartet in his pre-match press conference on Friday, but all four look likely to unavailable in what is a big game for Liverpool if they are to keep in touch with the Premier League top four.

The Reds are not without injury concerns of their own, with Jordan Henderson missing the win over Napoli, though it’s believed his absence was nothing more than a precaution.

Long-term absentees Arthur, Luis Diaz and Diogo Jota remain out, while the game is also likely to come too soon for Joel Matip.