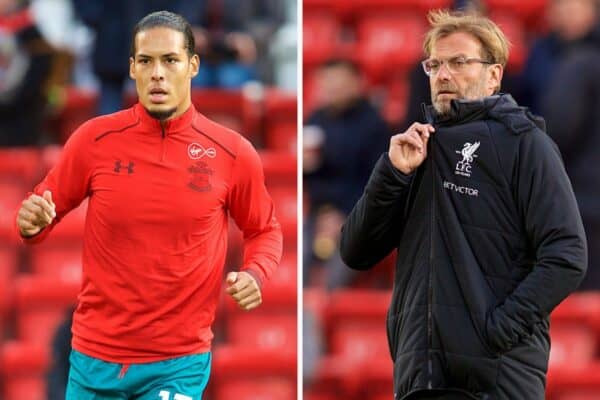 Virgil van Dijk has explained how Jurgen Klopp‘s habit of watching opposing teams warm up before matches “triggered” him before his transfer to Liverpool.

There are plenty of theories as to why the Liverpool boss chooses to watch other teams prepare for matches rather than his own.

But if intimidation is one reason, then it certainly seems to work, with Van Dijk revealing how he was affected when Klopp watched him warm up as a Southampton player at Anfield.

The game he refers to ended up being a 3-0 Liverpool victory, with Van Dijk part of a helpless Southampton defence, just months after his initial proposed move to Merseyside had broken down.

“I remember when I played my last game for Southampton at Anfield, when we lost 3-0, he was looking, and it definitely triggered me a little bit,” the Dutchman told Gary Neville on the Overlap.

He also went on to reveal some of the talks he had with Klopp when he was finally able to join Liverpool months later, claiming the Reds’ boss told him he was the only centre-back he wanted to sign at the time.

“The reason I chose Liverpool is because I wanted to play for a club that lives and breathes football, and also the project,” he continued.

“When I spoke to Jurgen Klopp, what he wanted from me at the time and in the future only made me even more hungry to come here.

“He saw that I was obviously a piece to the puzzle, as were the others that we got in the summer, for example Alisson and Fabinho.

“The importance he put on me was definitely a big boost. It was a bit like ‘we want to get you, or we don’t get anyone’, that was a big message for me.”

Later on in the interview, Van Dijk had some interesting things to say about Liverpool’s two full-backs Andy Robertson and Trent Alexander-Arnold.

When explaining his admiration for Robertson, he revealed how he tried to convince Celtic to sign him during his time playing in Scotland.

“I played against him when I was at Celtic, playing against Dundee United,” he explained.

“Funnily enough, I was saying to our scouts that we should try and get him at Celtic. But in the end he went to Hull and things happen, but playing with him has been incredible.”

Liverpool’s No. 4 also weighed in on the debate surrounding Gareth Southgate’s use of Alexander-Arnold at international level, claiming that despite England’s strength in depth in his position, the Liverpool right-back should definitely be in the squad.

“I was surprised last time that I saw him in the stands,” Van Dijk added.

“To be fair, England are very lucky with very good right-backs. Reece James is also outstanding, Kyle Walker, but I definitely think that Trent should be at least in the squad.

“If you give him the confidence that everyone needs, he can be so valuable for England.”