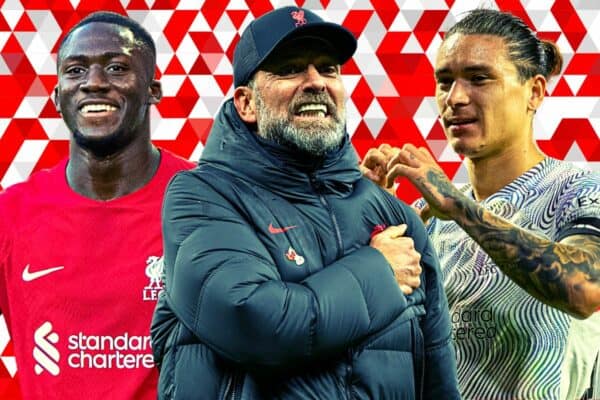 With the first-ever winter World Cup drawing to a close over the weekend, attentions now turn back to club football. Here, we take a look at five reasons to be positive about Liverpool’s second half of the season.

After an underwhelming start to their league campaign, Jurgen Klopp‘s side know they must be far more consistent with their performances and results if they are to have achieved anything in the Premier League by the time the season draws to a close in June.

Liverpool are sixth in the Premier League ahead of top flight’s resumption on Boxing Day, seven points off the top four and 15 points adrift of league leaders Arsenal.

However, the Reds eased into the Champions League knockout stages with five wins from their six Champions League group matches, and have a Carabao Cup last 16 clash against Man City to look forward to this week.

It wasn’t the start we’d all hoped for, but there are still plenty of reasons to be optimistic about the remainder of Liverpool’s season.

Having missed the first two months of the season with a knee injury, Ibrahima Konate‘s impact on this Liverpool team was clear for all to see when he returned to fitness prior to the break for the World Cup.

His good form continued in Qatar, with the centre-back starting two of France’s three group games and their semi-final against Morocco.

He was very unlucky not to have started the final, but nonetheless, it’s been great to see Konate injury-free and showcasing his talent on the big stage.

Liverpool fans won’t be at all surprised by his performances, with Konate one of the Reds’ key players in his debut season with the club, and their standout performer in the Champions League final.

The 23-year-old should surely now be considered the first-choice partner for Virgil van Dijk, and should he stay fit, Liverpool will have a much better chance of achieving something between now and the end of the season.

Nunez looks to have settled

He certainly didn’t enjoy as successful a World Cup as Konate, but before Liverpool’s campaign came to a halt, Darwin Nunez was starting to enjoy himself at club level.

His brace against Southampton in Liverpool’s last competitive match was arguably his best performance since his club-record arrival from Benfica, and another two goals in the Reds’ 4-1 friendly win over AC Milan last week won’t have done his confidence any harm.

With Luis Diaz and Diogo Jota still out injured for the foreseeable future, Nunez will have a key role to play in the coming weeks, and may continue in a role on the left side of Liverpool’s attack for the time being.

For all the talk of his difficult start to life at Anfield, nine goals from his first 18 appearances certainly isn’t a bad return, and you get the impression there’s plenty more to come.

Days into their warm-weather training camp in Dubai, Liverpool were rocked by the news that Diaz had suffered another knee injury and is now unlikely to be available until March.

There are, however, several players who were in the treatment room for the early stages of the season that now look ready to make an impact upon the Reds’ return to action.

Naby Keita and Alex Oxlade-Chamberlain both looked in good shape in Dubai, with the latter’s start against Milan perhaps an indication that he could have a big role to play in the absence of Diaz and Jota.

Joel Matip is fit again, while Calvin Ramsay has shown glimpses of his undoubted talent since his recovery from a back problem.

Reports suggest Jota should be back in action in February, while Arthur is said to be ahead of schedule in his recovery from a serious muscle problem, and Kaide Gordon is nearing fitness after a 10-month lay-off.

The contributions of several hugely talented young players was one of the main positives to come from the trip to Dubai, and that was especially evident in that win against Milan.

Stefan Bajcetic started both matches in the UAE and looked more than comfortable at the base of Liverpool’s midfield. What’s to say he’s not ready for more opportunities in the coming months?

Then there’s Bobby Clark and Ben Doak, who both delivered excellent assists for Nunez against Milan and, at 17 years of age, look likely to spend much of the remainder of this season training with the first team.

Klopp’s praise of young defender Luke Chambers should also be noted, with the Reds’ boss going as far as to say he “has everything” for a centre-back, which is especially interesting considering he’s played the majority of his football at youth level as a left-back.

Should Liverpool progress in the domestic cup competitions, we should be seeing plenty more of their exciting young prospects before the end of the season.

Still all to play for

A difficult start to the season, yes, but there’s still plenty of football to play.

Liverpool’s improved league form before the break has put them in a position where a top four finish is still easily attainable with a good run of results, with a game in hand on Tottenham who are currently in fourth.

Should they get past Man City in the Carabao Cup, Man United may only be the other ‘big six’ team left in the competition.

Klopp was very pleased by the work his side got through in Dubai, with significantly less players at the World Cup than many of their rivals, and an onus on regaining the intensity to their game that has made them so difficult to play against in recent years.

And should they be in a good position in the league come mid-April, there’s every chance they’ll be able to finish their campaign strongly, with Leeds, Nottingham Forest, West Ham, Tottenham, Brentford, Leicester, Aston Villa and Southampton their last eight opponents.

If there’s one thing we’ve learned since Klopp’s arrival, it’s that we should never, ever write him or his team off.

Time to get to work. Up the Reds.