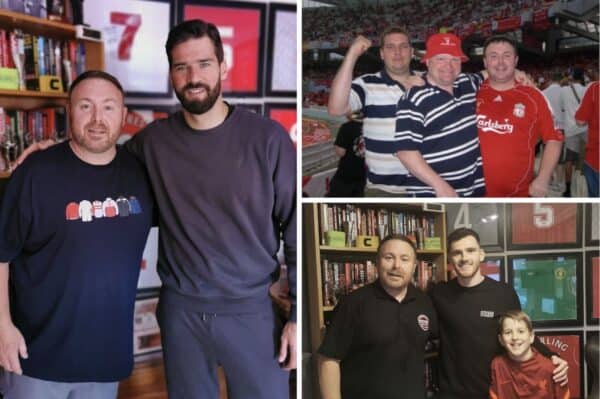 In the latest in our ‘My Liverpool Life‘ series, we meet Rob O’Brien – a man who has had the likes of Andy Robertson, Alisson and many more in his house!

Rob runs ‘Liverpool Private Signings’ – where supporters can get their own memorabilia signed by current and former Liverpool players.

It’s a unique labour of love for the lifelong Red! Here, he tells us his story.

I started following Liverpool because…

My dad was a massive Liverpool fan and I was born in December 1976 – five months later we would be crowned kings of Europe for the first time.

No going back then!

I was hooked. I was in the Main Stand, seeing the Kop was amazing.

My favourite memory and season supporting the club was…

Barcelona 4-0. Best ever Anfield atmosphere, shared with my best friends, and I will argue with anyone over that.

My favourite season has to be the 2001 treble as I went to every single game that year.

What a ride and I honestly believe Gerard Houllier put us on the map to greatness that season…12 European finals in 21 years since then.

How did you get into the signed memorabilia?

I started collecting memorabilia in the late 1990s and this turned obsessive from 2001 onwards, but it turned out I was buying fakes from a guy who had full collections.

You’ve met a lot of former and current players. Do you have any unique stories or memories you can share?

The first time I went to Roger Hunt’s house to do a signing, I was in awe.

This was my grandad’s hero and I was so nervous – I should have been, Roger had the world’s strongest handshake!

Sitting there and chatting all things Liverpool was one of the best days of my life.

You recently did a signing with Alan Hansen. We don’t see much of Alan now, how is he?

Alan is doing very well. He’s very much enjoying retirement, plays a lot of golf and enjoys going on holiday – as well, of course, as watching the Reds, obviously.

I had been after a signing with Alan for a number of years and we have been in touch for a good while now. Anyway, I think I had finally worn him down and we met up one Sunday morning at Formby Hall Hotel.

He was a giant of a man in every way. I’ve been lucky enough to meet my heroes, but Alan was part of the Holy Grail for me. One of the last I needed.

Not only did I need him on all my European shirts but also championship photos and cup finals and programmes and the like.

But I am not alone. A lot of fans also needed him, and through my Facebook group Liverpool Private Signings I have fans from all over the world from Singapore and China through Canada, the USA, Australia, New Zealand and around the corner from me in Kirkby.

So it was an honour to get this signed by Alan.

One thing that will stick in my head is how humble he was and he actually said afterwards that he was a little emotional signing all the shirts and photos as it brought all the memories flooding back of the great times he had at our amazing football club.

What makes your signings unique?

Authenticity is the key for me.

When a fan sends in their prized possession of, say, a 1978 European Cup final shirt which is just missing Alan Hansen, and the messages I get that it was their dad’s shirt and it’s got Emlyn Hughes, Ray Clemence and Ray Kennedy on it and now by Alan signing it it can be finally framed, it’s priceless.

Ninety-nine percent of the time, the fans will get a photo of the player signing their very own item that they have sent in.

Any signings coming up that you can tell us about?

And how can people get their merchandise signed and follow you?

Liverpool Private Signings is on all the socials and it’s a special place to be.