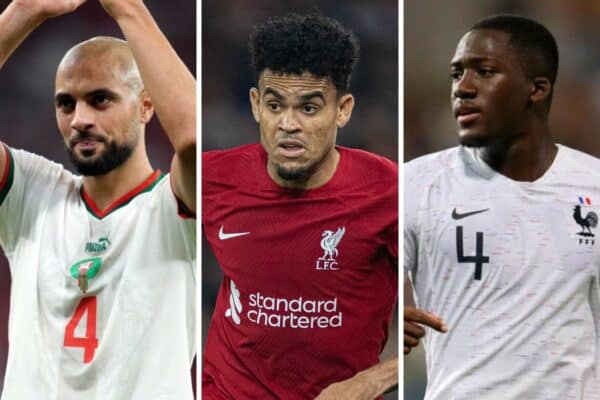 On the day we find out who joins Argentina in the World Cup final, one rumoured Liverpool target has discussed his “great honour” at transfer links.

Fiorentina midfielder Sofyan Amrabat has been the talk of this year’s World Cup, as the backbone to Morocco’s historic run to the semi-finals (so far).

That has, unsurprisingly, led to an increase in speculation over his future.

Liverpool were first linked with the 26-year-old at the very start of the tournament, and claims of a possible switch to Anfield – as early as January – have intensified in the days since.

They are not alone, of course, and in an interview with Spanish publication Marca, the all-action midfielder was questioned on interest from the likes of Atletico Madrid and Barcelona.

“It’s a great honour to be associated with these types of clubs,” he admitted.

“Right now, I’m playing for Fiorentina. I have a lot of respect for my club, it’s a great team.”

Amrabat, rightly, has not ruled out an extended stay at Fiorentina, though he added the immortal line that “no one knows what the future will bring.”

Photo of the day

Match of the night

It’s France vs. Morocco in the World Cup semi-finals tonight, kicking off at 7pm on BBC One.

Ibrahima Konate, who starts, has a chance of making the final.