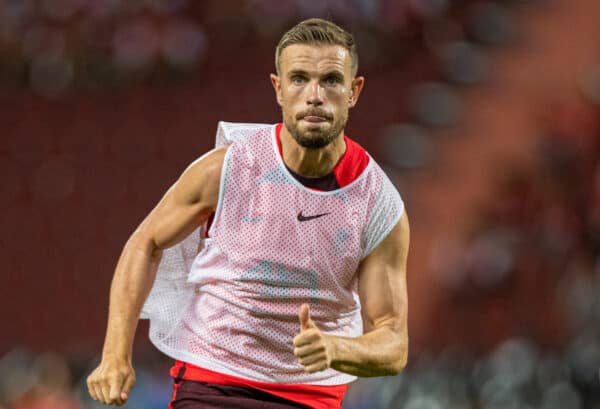 Jordan Henderson is currently on his post-World Cup break, but the captain took time out of his holiday to visit Liverpool’s training camp in Dubai.

With England suffering a 2-1 defeat to France on Saturday, knocking them out of the World Cup at the quarter-final stage, Henderson was granted a week off.

The midfielder, along with Trent Alexander-Arnold, Virgil van Dijk, Alisson and Fabinho, is not due to report back for training until the start of next week.

But with Henderson spending his break nearby, there was an opportunity for a visit to the Nad Al Sheba Sports Complex, where Liverpool are based for their mid-season camp.

He caught up with Jurgen Klopp ahead of Liverpool’s session in the sun on Wednesday, with Andy Robertson‘s reaction priceless:

We had a visitor at training today, the captain came and said hello to everyone… ? pic.twitter.com/5jJMhPcgX8

It remains to be seen whether Henderson will rejoin training early, though it is more likely that he is back with the squad when they return to Merseyside.

His presence got fans talking, though, having grown close to priority Liverpool target Jude Bellingham during their time in Qatar:

Reporting back from agent Jude duty

whys jude not come with him pic.twitter.com/0aja8ZDBVy

Of course, Bellingham was not alongside Henderson, with the 19-year-old now due to report back for mid-season training with Dortmund.

But it is not out of the realms of possibility that he came up in conversation with Klopp, who by all accounts has set his sights firmly on a deal for the teenager next summer.