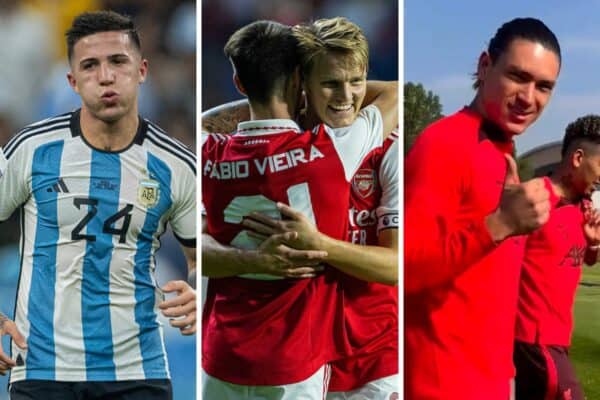 Arsenal have been crowned winners of the Dubai Super Cup before Liverpool have even played their second friendly against AC Milan, while Darwin Nunez has now returned to action with the Reds.

After beating AC Milan 2-1 on Tuesday, and winning the penalty shootout that followed, Arsenal are winners of the Dubai Super Cup.

Martin Odegaard put the Gunners in front with an excellent free-kick, before Reiss Nelson doubled their lead before half-time. Fikayo Tomori’s late goal for Milan would only prove to be a consolation.

Former Liverpool striker Divock Origi started for AC Milan, ahead a reunion with the Reds this Friday.

Arsenal also beat Lyon in 90 minutes and on penalties last week, meaning they have already accumulated eight points from the competition, with no other team able to catch them.

Lyon finished their campaign with four points, having beaten Liverpool in normal time and in penalties on Sunday, while four is also the maximum number of points the Reds and Milan can achieve from their final match against each other this Friday.

Jurgen Klopp won’t be too disappointed, with the sole aim of these friendlies in Dubai to regain fitness and prepare for the second half of the season, with Liverpool returning to competitive action against Man City in the Carabao Cup next week.

On Tuesday morning, we rounded up the latest reports linking the Reds with a move for Benfica and Argentina midfielder Enzo Fernandez.

Portuguese publication O Jogo have backed up initial reports from Spain and Argentina that Liverpool have a “pre-agreement” in place to sign the 21-year-old.

They say the Reds have made a “promise to match” any offers for Fernandez from elsewhere, with the player also keen on the idea of a move to Merseyside.

The story goes as far as to say the Argentina midfielder, who will feature in their World Cup semi-final against Croatia on Tuesday, “is already in Liverpool’s hands.”

If a move were to happen, it would likely be next summer rather than in January, with Benfica said to be asking for €120 million for a deal at the start of next year.

Bellingham, Fernandez, both, or neither?

Why Lallana had to “Google” Klopp!

Social spot of the day and match of the night

Upon his return to training, Darwin Nunez has updated his profile picture on Twitter. Got to say, we love it!

The World Cup semi-finals begin with Argentina vs Croatia this evening. Never mind Messi vs Modric, we’ll be keeping an eye on Enzo Fernandez vs Dejan Lovren!