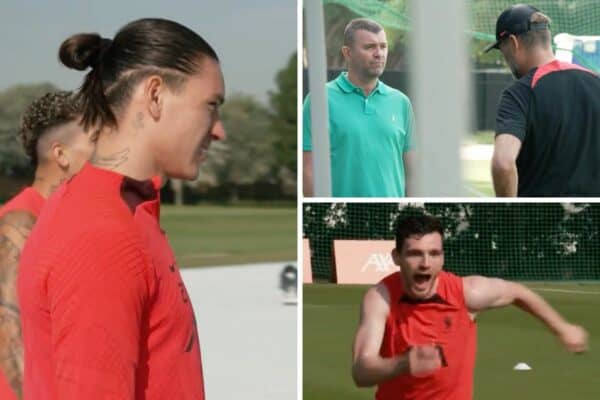 As Liverpool enter the second week of their warm-weather training camp in Dubai, we pick out five things we spotted from their latest training session.

Despite the result, Sunday’s 3-1 defeat to Lyon will have been a useful exercise for the players, as they near a return to competitive action next week.

The Reds will remain in the UAE until the weekend, with another friendly against AC Milan scheduled in for this Friday.

With the players already up to speed in terms of fitness, much of the trip has been focused on relaying tactical information to the players, with Jurgen Klopp keen for his side to improve their pressing game in the second half of the season.

Here are five things we spotted from Liverpool’s latest ‘Inside Training‘ video on Tuesday.

After Uruguay failed to make it past the World Cup group stages, Darwin Nunez is the first Liverpool player that was involved in Qatar to have now reconvened with the Reds.

Nunez was pictured walking out for training with Roberto Firmino, and took part in the warm up session and rondos alongside his team-mates.

He didn’t appear to take part in the finishing exercise later in the session, as Liverpool ease him back into action.

Despite a disappointing tournament for Uruguay, Nunez looked to be in good spirits, and should now be in contention to face Milan on Friday.

Jones spotted, but not in training – Keita also absent

Curtis Jones doesn’t appear to have taken part in any of Liverpool’s team training sessions in Dubai, and is presumably working his way back from an injury.

Last week, he was pictured jogging around the perimeter of the pitches with fitness coach Dr David Rydings.

On Tuesday, he could be seen holding his boots while arriving at training alongside Nunez, but was not pictured working alongside the rest of the squad.

That may suggest he was doing individual work out on the pitches, with a return to full training hopefully not far away.

Naby Keita was another who wasn’t involved in the session, which is hopefully just a case of Liverpool managing his workload as he returns from injury. Layton Stewart, who came off with what looked like a dead leg against Lyon, was also absent.

Prior to the training session, Klopp was spotted speaking with former Liverpool midfielder Dominic Matteo and his wife.

Matteo, who is presumably on holiday in Dubai, took the opportunity for a chat with the Reds’ boss on the sidelines, as the players got ready for the session.

Having undergone surgery on a brain tumour in November 2019, before being declared as fully recovered in April of the following year, it’s good to see Matteo in good spirits!

Robbo gets one over Ramsay

Calvin won’t want to see this one again!

Andy Robertson celebrated just as wildly as you’d expect when he managed to nutmeg fellow Scotsman Calvin Ramsay during the rondos.

“The Scottish partnership!” Pep Lijnders could be heard shouting afterwards.

You get the impression Robertson is going to be an excellent role model to have around for Ramsay.

The players took part in a finishing session in the sunshine, with the likes of Alex Oxlade-Chamberlain and Ben Doak in the goals.

There were, however, some impressive saves as well, with youngster Fabian Mrozek earning praise from Adrian after keeping out Oxlade-Chamberlain’s effort from close range.

The idea of the session was for the players to work on their interplay and movement, before attempting to get themselves on the end of crosses from wide areas.

Another good day’s work for the Reds!