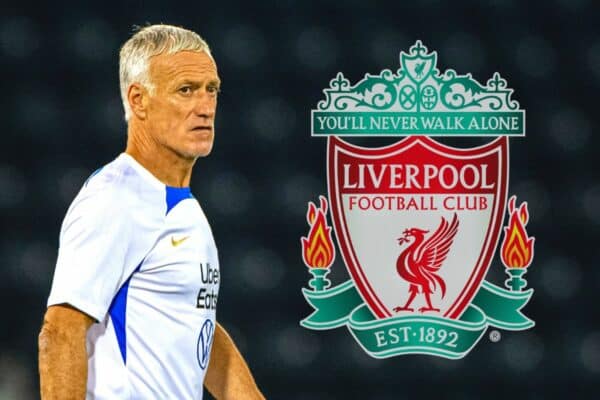 Should Didier Deschamps lead his France team to glory in Qatar this week, he will win his third World Cup medal, but there was a time when he almost joined Liverpool.

The 54-year-old guided the French to the semi-finals with victory over England last Saturday, with Morocco their next opponent.

Many are now tipping France to retain their title, with Ibrahima Konate starting two of their three group matches and now the only Liverpool player left in the competition.

Deschamps’ contract is due to expire at the end of this month and it remains to be seen whether he will choose to extend his time in charge.

There has been a suggestion that he could be interested in a move to the Premier League, but did you know that he was interviewed for the Liverpool job in 2010?

After guiding Marseille to a domestic double in 2009/10, Deschamps was interviewed by the Liverpool board after Rafa Benitez’s departure.

According to the Daily Mail‘s Dominic King, Deschamps came across well. However, Christian Purslow, the club’s managing director at the time, eventually opted to appoint Roy Hodgson, amid doubts over the Frenchman’s lack of experience coaching in England.

At the time, Deschamps said he had turned down an offer from Liverpool, claiming their interest was bad timing.

“I am very proud that a club of the standing of Liverpool showed interest in me this summer,” he told reporters ahead of a Champions League clash against Chelsea months later.

“But, to be fair, it wasn’t good timing. I had just started pre-season training with Marseille.

“I don’t think the fans or the club officials would have been very pleased if after two days back I was looking to join another club.”

He would eventually opt to stay on at Marseille until 2012, before leaving by mutual agreement, and was appointed Laurent Blanc’s successor as France manager days later.

He received a lot of criticism in France after their poor performances at Euro 2016 and Euro 2020, but his World Cup record is unquestionable.

And should he decide to pursue a new challenge after this World Cup, don’t be surprised if there is interest from the Premier League.