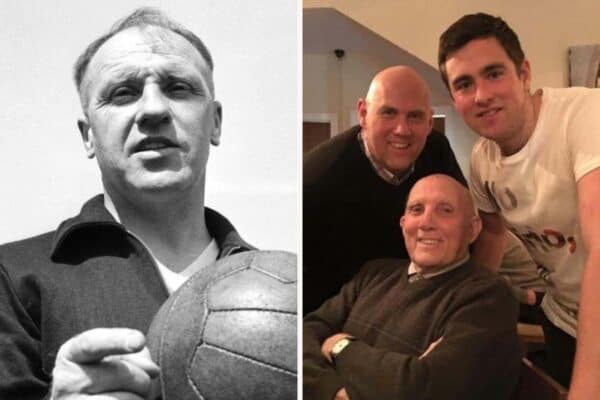 Finding yourself in the presence of Bill Shankly would have been an honour for any fan, and the son of Mr Liverpool has shared a special moment from the Boot Room.

Being the son of a Liverpool legend guarantees a fascinating life filled with incredible stories and littered with great characters.

Any chat with Paul Moran, whose father was none other than Mr Liverpool, Ronnie Moran, can leave you mesmerised and feeling a little envious.

It took place in October 1977, when Anfield was the scene of a World Cup qualifier between Scotland and Wales.

The Welsh had been banned from hosting games at their Ninian Park home after crowd trouble in a match with Yugoslavia the previous year.

However, the prospect of accommodating the huge travelling Tartan Army at the proposed alternative venue, Wrexham’s Racecourse Ground, was a non-starter.

That meant that Liverpool would be the scene of one of the most controversial games in the history of the Home Nations.

With the Kop filled with fans of both Scotland and Wales, the atmosphere was electric as the Welsh valiantly battled their way to half-time with the scores level.

Then, on the hour mark, with Shankly, Stein and a young Paul Moran watching on from the Main Stand, Scotland won a hotly debated penalty.

Welsh centre-half Dave Jones and Scot Joe Jordan jumped together in the penalty area, with arms raised. The ball appeared to strike an arm and the referee whistled for a spot-kick.

Uproar ensued and Jordan is seen celebrating, waving his clenched fist in triumph as the ball hits the net.

Kenny Dalglish would ensure that broken Welsh hearts lay completely shattered when he added Scotland’s second, booting Wales out of the World Cup.

After the match, Paul found himself in the famous Boot Room, sat intently listening to a debate raging between Shankly, Stein, Bob Paisley and Joe Fagan over whether the ball was handled by Jordan or Jones.

Naturally, the Scots were arguing that it was a just penalty for Scotland. Paul was a 15-year-old lad at the time, and simply sat quietly in the corner, enthralled.

As the argument reached an impasse, Shankly turned to the shocked youngster and asked for his opinion. Paul told This Is Anfield what happened next:

“Shanks looked right at me and said ‘Paul, who do you think handled it?’. I looked at him and confidently declared that it was definitely Joe Jordan. It was never a penalty.

“There was a moment’s silence as Shanks thought for a second before looking me in the eye and saying, ‘it’s great you have the courage to say what you believe, but let me tell you son, you are bloody wrong!’.

“The argument raged for a little while longer, then, as they eventually gave up and left the Boot Room, Jock Stein turned to me and smiled.

“‘I thought it was Jordan too, but I couldn’t be bothered arguing with Bill’, he said.”

Stein was a Scottish football legend in his own right, having previously managed the national team. He would lead Scotland again in the 1978 World Cup in Argentina.

However, even he knew that it wasn’t worth being on the wrong side of Bill Shankly.