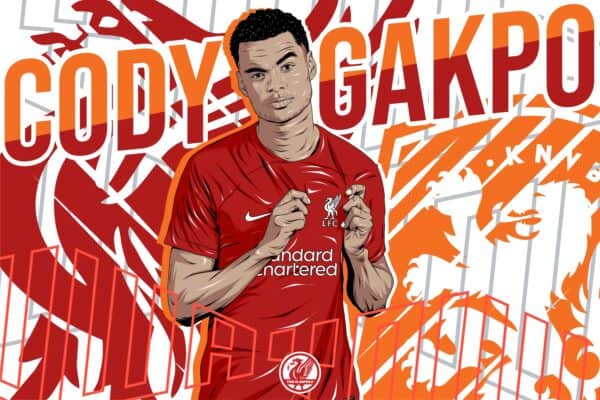 Liverpool have confirmed the signing of Netherlands forward Cody Gakpo, with reports suggesting the deal could end up costing the Reds as much as £44 million.

Gakpo is believed to have signed a five-and-a-half-year contract, with Liverpool wasting no time in strengthening their attack ahead of the January transfer window.

News of the deal to sign the 23-year-old broke following the win at Aston Villa on Boxing Day, with PSV confirming the agreement later that night.

And Liverpool have now made an announcement of their own after the player agreed personal terms and completed a medical on Wednesday.

The Dutchman will wear the No.18 shirt at Anfield, and told the club’s official website:

“I feel really good, I’m really excited to be here. I’m looking forward to start training and start playing for this amazing club.

“I think this is a great club for me to come in and try to show what I can [do] and try to help the team to achieve more beautiful moments that they already did in the past years.

“I think for me personally it’s also good to develop here and there’s a lot of great players here [who] I can learn a lot of things from.”

Gakpo won’t be able to feature in the Reds’ final game of 2022, a home tie against Leicester on Friday, but he could make his debut against Brentford next Monday, January 2.

With Luis Diaz and Diogo Jota sidelined with long-term injuries, Liverpool have taken the opportunity to bolster their attack in a similar deal to the one which saw Diaz arrive from Porto this time last year.

Man United have long been linked as Gakpo’s most likely destination, with Erik ten Hag said to be an admirer, but it’s Liverpool who have got their man.

Able to operate in a number of attacking positions, Gakpo has already racked up an impressive 13 goals and 17 assists in 24 appearances at club level this season.

He also scored three goals in five games at the World Cup, helping his country to the quarter-finals alongside Virgil van Dijk, his national team captain and new Liverpool team-mate.