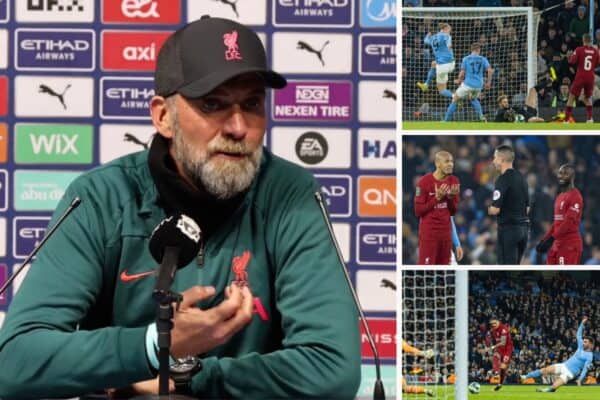 Jurgen Klopp knows his side can do “better” after their 3-2 defeat at Man City in the Carabao Cup, and there was a word on James Milner, Trent Alexander-Arnold and Virgil van Dijk.

Here are three key points from the manager after the Reds’ cup exit:

You know football is back when injuries and illness strike Liverpool.

James Milner was withdrawn early in the first half and Klopp said he “felt something in his hamstring” but “after 30 years in the business he said he doesn’t think it’s a lot.”

We saw Milner and Joe Gomez at right-back and if you’re wondering where Trent was he “is ill so we have to wait,” but the good news is that “Virgil trained yesterday completely normal and should be ready for Monday.”

So good and a little bit of bad news on this front!

“Should’ve defended all 3 goals much better”

Liverpool have shown to have a soft underbelly throughout the season so far and it was the same on return from the break, being cut open too often.

It’s all a little too easy at times for the opposition and the manager knows his side have plenty to improve.

“We should’ve defended all three goals much better…third goal especially we are not switched on when they start their little routine,” Klopp said.

“Obviously still a lot of space for improvement.

“We played against probably the best team in the world, unbelievable how they are. It’s normal that you struggle in moments, I accept that.

“I will not count too much now because we won’t play every three days against Man City, but we can do better.”

There is no VAR in the Carabao Cup until the semi-final stage, a strange move so thinks Klopp with officials having got used to relying on the technology.

“The refs are used to VAR and all of a sudden you tell them today not,” he said.

“It looked like in a couple of situations that they were waiting or thinking like there was VAR.

“I think it would make sense to use it, especially in a game like this.”