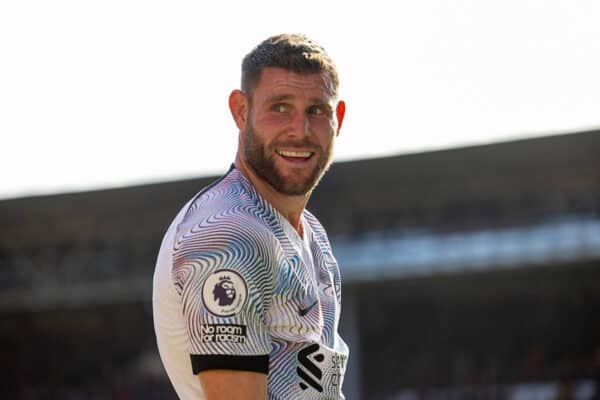 “Do you want that stress?” – James Milner discusses coaching future

James Milner is one of the players many would tip for a future in coaching after his playing career, but how does he himself view the possibility?

But how does the 36-year-old himself feel about that?

Milner is currently working his way up the coaching pyramid, getting his badges and spending time at Liverpool’s academy, sessions that he really enjoys.

As for moving into coaching after his playing career is over, Milner is all too aware of how cut-throat the football industry is, begging the question of if ‘the stress is worth it?’.

In a chat with former professional goalkeeper Ben Foster for Amazon Prime, Milner is asked if being an assistant manager is something he would be interested in.

“I don’t know, I think that comment is as a senior player you try and help out where you can – on the field, off the field, communicating,” Milner said in response.

“I’m doing my badges, I’m on my [UEFA A Licence] now, so I’ve done quite a few sessions with the younger guys at the academy, which is good.

“They then sometimes come up and train with us so it’s good because you’ve seen them.

“When you’re doing the session, I enjoy it – it’s easy, innit, it’s football and you’re basically it every day in training anyways.

“You’re helping each other, talking, you see things and what’s going on.

“In football, you see a manager come in, do well and get a new contract for five years and get sacked six months later.

“For me, every manager needs at least a couple of years, he needs to put his ideas, get the players he wants in,” Milner continued.

“Any successful team, it takes time. But football is a business and if people think you’re going down the wrong path it changes so quick.”

Milner is out of contract at the conclusion of the season, his 21st in senior football, but remaining at Liverpool beyond a playing capacity is certainly not out of the realm of possibility.

It would be beneficial to the club to keep him around, but back in February he did say that his “only intention at present is to play football for as long as I can. Us footballers are retired from football for a long time.”