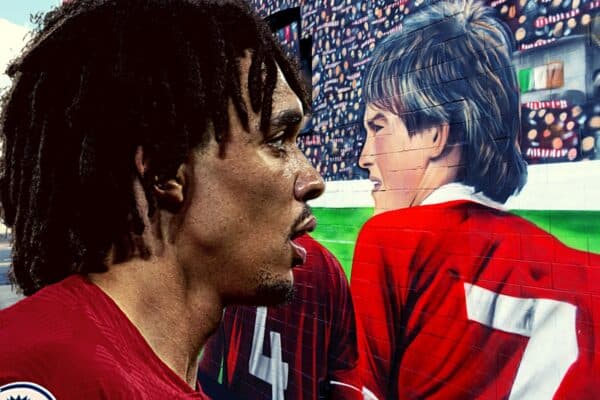 There have been many creative geniuses to grace Anfield throughout Liverpool’s history, but who has registered the most assists overall?

While goals can always be a natural area of focus in football, assists are just as influential and often more aesthetically pleasing.

With that in mind, we’ve delved into the Liverpool archives to find out who has the most assists in their history.

Doesn’t this just sum up the magic of Trent Alexander-Arnold?

He’s only recently turned 24 and he’s already in the top 10!

The right-back has been the creative hub of this Liverpool team under Jurgen Klopp, proving to be the most influential attacking full-back in Europe, registering 61 assists so far.

Barring Kevin De Bruyne, nobody else in the Premier League possesses his passing and crossing ability, and the hope is that this is still only the beginning for him.

Liverpool’s No. 66 could certainly top the pile eventually.

One of football’s greatest myths is that Salah’s game purely centres around goals – his ranking in this list perfectly dispels it.

The Egyptian King has a wand-like left foot that is capable of creating just as much as scoring, with a penchant for an outside-of-the-foot pass always standing out.

While any true goalscorer will always naturally shoot more than others, he is selfless in the right moments.

Heighway recently retired from his role as an academy consultant at Liverpool, following a legendary spell at Anfield both on and off the pitch.

While his coaching ability is what the younger generations may know him for, he was also a fantastic footballer during the glory days of the 1970s.

Heighway memorably crossed to perfection for Terry McDermott to finish off a stunning team move against Tottenham in 1978, and his class in wide areas shone through time and time again.

While others may have earned more accolades during that time, from Kenny Dalglish to Graeme Souness, the Irishman was an unsung hero who assisted at will.

Has any player been more selfless during the Klopp era than Firmino?

The Brazilian is one of the most subtle and intelligent attacking players to ever play for Liverpool, laying on countless goals for team-mates.

Firmino’s ability to drop deep and allow space for the likes of Salah and Sadio Mane has been a joy to watch, and he will always naturally look for a pass instead of shooting in dangerous areas.

It’s now 71 assists and counting for Bobby – here’s to many more.

Sitting just ahead of Firmino is Keegan, who has become increasingly underrated as time has passed.

Perhaps it is due to ditching Liverpool for Hamburg in 1977, with Dalglish then taking his spot, but it is easy to forget what a superstar he was in his own right.

Keegan’s on-pitch relationship with John Toshack allowed him to lay on many goals for his team-mate, and he was as adept at creating as he was at finding the back of the net.

Some may be surprised to see Rush in the top five of the Reds’ all-time assist-makers, but that’s how magnificent he was.

The legendary striker accumulated 83 assists for Liverpool in total, linking with colleagues for fun, and his average of a goal or assist every 132 minutes is only bettered by Salah (96) in this list.

Before pressing became such a prominent aspect of modern football, Rush was renowned for harrying opponents and working for the good of the team, and his all-round game was superb.

Contrary to the beliefs of some, he was far more than just a goalscorer.

Like Keegan, McManaman has become criminally underrated having left Liverpool during his prime, having upped sticks for Real Madrid in 1999.

If Robbie Fowler was the goalscoring icon at Anfield during the 1990s, his best mate was very much the assist king, so often being tasked with opening up defences.

There are too many great assists to mention – running the length of the pitch to set up Fowler against Man United in 1995 stands out – but no player had a bigger influence on games for the Reds during that time.

McManaman would be outstanding in this current Liverpool team, not only possessing great natural creative ability but also having a bottomless pit of energy.

Has there ever been a greater winger and left-footed player in Liverpool’s history than John Barnes?

It’s certainly up for debate.

The wizard-like Reds legend could put a ball on a sixpence for team-mates, as his assist for Rush in the 1989 FA Cup final against Everton showed, and his final ball was as consistent as anyone in Europe at his peak.

Once age slowed him down, Barnes then further showcased his class on the ball in midfield, dictating matches and creating from a deeper, more central area.

Gerrard is as complete a midfielder as there has been over the past 30 years, with Liverpool’s iconic ex-captain capable of scoring, biting into tackles, controlling games and playing across several positions.

His ability to create goals arguably remains his most underrated asset, however, with some claiming he was more about ‘Roy of the Rovers’ chaos than subtlety.

That couldn’t be further from the truth, with Gerrard showing an incredible passing range, both long and short, and racking up 145 assists for Liverpool across 710 appearances.

The deft touch to Xabi Alonso at home to Arsenal; the outside-of-the-boot balls to John Arne Riise and Daniel Sturridge; the inch-perfect pass to Djibril Cisse in the 2006 FA Cup final – the list just goes on and on.

It just had to be Kenny who topped the pile, didn’t it?

Alongside Gerrard, the Scot is widely considered to be Liverpool’s greatest-ever player, and it is his genius on the ball that he will forever be most adored for.

Few British players in history have been as capable of seeing a pass as Dalglish, who was unrivalled at receiving the ball on the half-turn and producing something out of nothing.

One outrageous spin and pass to Rush against Watford at Anfield in 1982 was as good as it gets, and it contributed to his record-breaking tally of 167 assists in a Liverpool shirt.

The question is: how long will he be at No. 1 for?