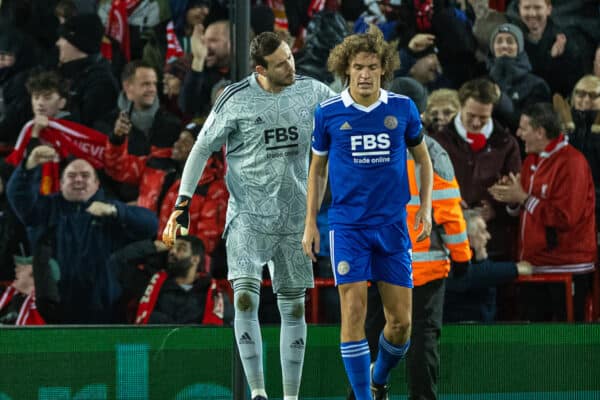 “Got away with absolute murder” – Liverpool fans realistic despite victory

Liverpool scrapped their way to a 2-1 victory at home to Leicester on Friday, moving to within two points of the Premier League‘s top four.

Jurgen Klopp‘s side hosted the Foxes for their final outing of 2022, with new signing Cody Gakpo watching on from the stands.

Liverpool made a terrible start, with poor defending allowing Kiernan Dewsbury-Hall to put the visitors ahead in front of a stunned Kop.

Two own goals from Wout Faes handed the Reds a 2-1 lead at the interval, despite a poor performance, and they held on in the second half.

There were various topics to discuss after the game, with supporters providing their thoughts across social media.

Liverpool may have won, but it was far from convincing – especially in midfield…

Really poor. Average teams turning it into a game of basketball. Three points gladly accepted, but there's a huge hole in the midfield

Do we really have to watch another 22 games of this?

Massive 3 points but we really have to get midfield reinforcements in quickly, can’t keep papering over it and hoping to get away with it. At least 1 in Jan is vital.

Hopefully we buy a good midfielder soon because omg do we need one so so badly.

Marginally the better team on the night but not the Liverpool we are used to, poor performance all things considered, would be worried if we played like this vs Brentford.

But just 2 points off top 4, Gakpo to come in and hopefully push past this in 2023

“Got the three points but that was just chaos. Need to start getting some more control in games.”

– LFC Red in the comments section.”

But seriously that was pretty dire from Liverpool all night long. Got away with absolute murder getting 3 points. Finding it hard to be too hopeful about 2023 based on what we’ve seen post-World Cup tbh.

#LFC end 2022 with one of the most unconvincing & undeserved wins I’ve seen under Klopp’s tenure at Anfield.

A performance that highlighted just how inadequate their midfield options are outside of Fab & Thiago.

I’m delighted with the 3pts.

Thiago my motm given he played midfield all on his own until Bajcetic came on.

Carra giving Motm to Trent. Had a good game, though idve definitely have given it to Thiago – was virtually on his own in midfield and was our best progressive passer plus putting out fires defensively caused by Elliott and Henderson.

“Henderson was terrible! If it weren’t for Thiago our midfield would have gotten slapped around all day.”

Thiago was phenomenal tonight, automatic starter and head and shoulders our best midfielder. But he’s also Thiago, chances of him staying injury free until May is minimal so we have to have more quality around him.

Imagine if we gave Thiago the right quality bedside him. He’s been incredible given the circumstances.

“Thiago was the only one with some fire in his cheeks, the rest was absolutely underwhelming.”

– Smudo in the comments section.

It’s a privilege to watch Thiago Alcântara in a Liverpool shirt. Special. pic.twitter.com/NhxHF8aBEY

There was also some support for Darwin Nunez, despite more iffy finishing…

Two games in a row where should Nunez have scored? Yes. But is he also the game changing reason why we won, yep.

Absolutely love Nunez. I’m not overlooking the missed chances. But he’s an unbelievable player. So dangerous. So much fun to watch.

Don't ever think Twitter is a true reflection of what fans think!!#LFC

Great to be at a packed Anfield again. Not a vintage performance but a big 3 points. Thought Nuñez was superb Really saw the need for midfield additions pic.twitter.com/bVdHYlyS8v