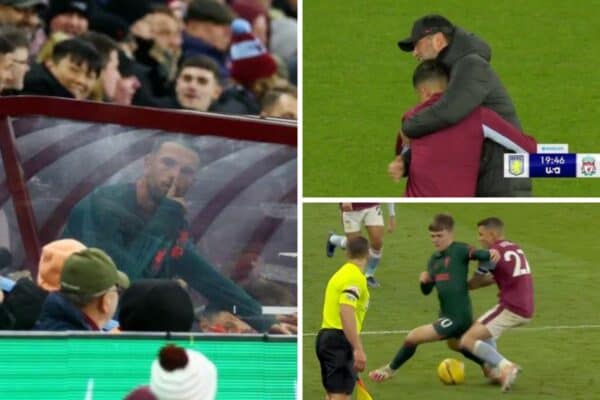 Liverpool marked their return to Premier League action with a 3-1 win over Aston Villa, and on the day the Reds also seemingly wrapped up a deal to sign Cody Gakpo, there was plenty for fans to discuss in the aftermath.

After missing a glut of opportunities in the Reds’ Carabao Cup defeat to Man City last week, much of the spotlight was on Darwin Nunez on Boxing Day.

And despite failing to add to his tally of nine goals this season, the Uruguayan was awarded Man of the Match by Amazon Prime, and told his critics to “keep calm” in a social media post after the game.

But there were plenty of other talking points to emerge from a busy Boxing Day for Liverpool, with a Jordan Henderson altercation and a moment between Jurgen Klopp and Philippe Coutinho among them.

We’re not quite sure what was said here, but something seemed to get under Henderson’s skin when he was substituted in the second half at Villa Park.

The cameras caught Henderson having words with some Villa fans behind the dugout as he walked off, and other images and fan footage has emerged showing him putting his finger to his lips as he took his place on the bench.

The 3-1 victory obviously did the talking!

Jurgen and Phil have a moment

Philippe Coutinho‘s Liverpool exit, which is somehow nearly four years ago, certainly didn’t go down well with much of the Reds’ fanbase.

Many will never quite forgive the Brazilian for the manor in which he engineered his move to Barcelona, but there’s clearly no love lost between Coutinho and Klopp.

What could have been, eh Phil?

If Lucas Digne didn’t know who Ben Doak was before this game, he certainly does now!

Minutes after coming on for his Premier League debut, the 17-year-old Liverpool winger had the confidence to let the ball run between his legs, before turning and racing on to it to launch an attack, leaving Digne on the floor.

Just the kind of “cheekiness” Klopp likes to see in his young players.

And a lovely post from Ben’s extremely proud mum…

Trent really was at the very top of his game at Villa Park, wasn’t he?

His pass in the build up to Mohamed Salah‘s opener was worth the admission fee alone.

A certain Mr. Gakpo will be licking his lips at the prospect of service like this!

That ball from Trent is just ridiculous pic.twitter.com/wUncQN1YDT

That pass from Trent Alexander-Arnold is an absolute joke.

In a post-match interview, Virgil van Dijk hinted at potential new arrivals in the coming weeks, by saying he hoped Liverpool could “welcome some new players at our football club” [in January] and that “quality is always welcome.”

Around an hour later, news broke that his fellow countryman Gakpo was on his way from PSV. Agent Virg at his best!

“Hopefully the injured players can come back soon, and hopefully we can welcome some new players at our football club.” ?? Van Dijk after Villa https://t.co/XXL2TL2LIq pic.twitter.com/CuknIKUU1N

Van Dijk after this evening's #LFC game: "Hopefully we can welcome some new players at our football club. We will see.”

I like how Virgil said ‘hopefully welcome some new players’ so that’s one, who’s next!?