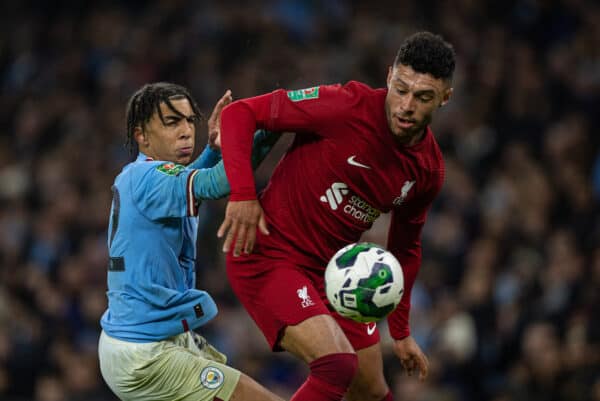 With Roberto Firmino missing Liverpool’s trip to Man City due to injury, Jurgen Klopp revealed Alex Oxlade-Chamberlain was another late withdrawal from his initial starting lineup.

The Reds’ return to competitive action saw them knocked out of the Carabao Cup by Pep Guardiola’s side after a 3-2 defeat at the Etihad.

Mohamed Salah, Fabio Carvalho and Darwin Nunez were all involved in Liverpool’s two goals, but Klopp had initially planned for two other players to start in attack.

Before the game, the Liverpool boss revealed Firmino sustained a calf problem in training earlier this week, claiming the injury is “not a big one but big enough for this period.”

And in his post-match press conference, Klopp said Oxlade-Chamberlain was also due to start, but was eventually only deemed fit enough for the bench after a bout of illness.

“From our point of view, we had to change late,” Klopp told reporters at full time.

“Bobby only in the last session felt something, so he was out. Then we had other problems.

“We planned Oxlade to start and obviously he is in a good moment, then he got ill two days ago. This morning he was fine.

“There are different struggles you always have and against City you better should have a perfectly oiled machine available because, how I said, they always do little things differently which have a big impact and you have to adapt to that quickly.

“We needed tonight 15 minutes, which was nearly too long but we found a way back in the game and that’s good.”

Oxlade-Chamberlain came on for Carvalho on the left side of the attack at half-time, playing an excellent pass into Nunez for Liverpool’s second equaliser.

He also started the Reds’ friendly with Milan in Dubai last week, and Klopp’s comments would suggest the 29-year-old is in line for more opportunities in the coming weeks.

The exact severity of Firmino’s issue remains unclear, but with Luis Diaz, Diogo Jota and Curtis Jones also sidelined, the likes of Oxlade-Chamberlain and Carvalho are likely to be needed over the festive period.

Illness also ruled Trent Alexander-Arnold out of Thursday’s encounter, with Klopp providing updates on him, James Milner, Virgil van Dijk and Ibrahima Konate after the game.