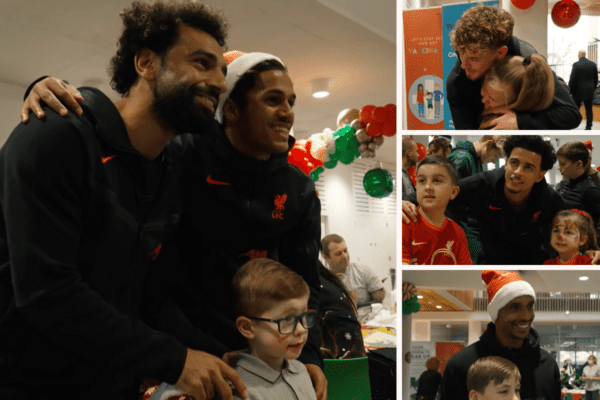 Having not been able to visit in person since 2019, a host of Liverpool players surprised children in a Christmas visit to Alder Hey hospital this week.

They did so alongside a group of Everton players, with Jones particularly enjoying the chance to mock the likes of Anthony Gordon and Alex Iwobi when posing for a photo with one of the kids, shouting “you don’t want a picture with all these, look at them!”

“We’ve been away for the past two years because of Covid but we are back now and it’s only right that we come here and give back,” Jones said.

“We appreciate the staff and are so grateful for all they do.”

Jones also enjoyed speaking to a child who told him he was often in the Kop helping out with the flags.

“It’s been amazing, it’s the best day of my life, today,” the young fan said when asked about his opportunity to meet the Liverpool players at the hospital.

Matip and Tsimikas were shown playing Jenga with one of the children, while Salah had a chat with a boy who told him he was his favourite player.

“It’s important to show the kids and the community that you always want to help them and make them smile,” Salah explained.

“It’s something that makes me happy as well.”

Later in the video, a young Everton fan was brutally honest about his lack of enthusiasm when meeting the Liverpool players, but Jones did manage to get a handshake out of him!

The video ended with Elliott sharing a hug with a young patient, as Liverpool concluded their annual Alder Hey visit for another year.