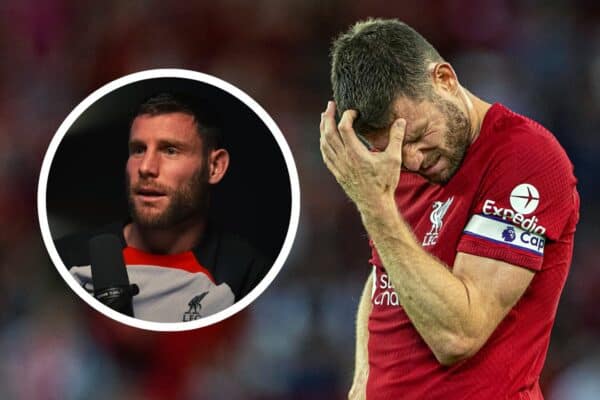 It’s something we all wish was different and James Milner has admitted that lifting the title in an empty stadium is something that still hurts.

When Liverpool won their 19th league title in 20220, it brought an end to their 30-year wait for a top-flight title.

Nothing will ever take that achievement away from the club, the players and the coaching staff involved, but vice-captain Milner has admitted he does “regret” the circumstances in which they ended up winning it.

The Reds lifted the trophy in an empty Anfield at a time when the Covid pandemic had brought a halt to life as we know it, with fans unable to attend.

And Milner says despite the enormity of the achievement, not being able to celebrate with the club’s fans “still hurts.”

“I’ve had a question before about the biggest regrets or lows of my career,” he told the club’s new We Are Liverpool podcast.

“I always say being relegated with Leeds was one, and not celebrating the league title with Liverpool the other.

“It does still hurt, 100 per cent. And that’s why the parade was so important.

“Everyone was buzzing winning the Champions League, but everyone knew we wanted the league title, how many league titles we’d won before, and how long the Premier League had been going and we’d never done it.

“That was obviously the dream when I came here to win the league title with Liverpool. To do it, with how much the fans wanted it, and not be able to be together…

“And then the first game of next season was Liverpool vs Leeds. Leeds hadn’t been in the Premier League for 17 years, Liverpool had just become league champions for the first time in however long, can you imagine that atmosphere in that game? And there was no one there.”

As Milner refers to, Liverpool did ensure that they celebrated with their supporters at a parade earlier this year which, despite coming the day after a forgettable Champions League final in Paris, was a truly special day for the club and the city.

Jurgen Klopp has since referred to this year’s parade as a day those involved “will remember for the rest of our lives.”

But it’s no surprise to hear that Milner and Liverpool’s players regret the fact they were not able to celebrate their long-awaited Premier League title with the fans at the time.