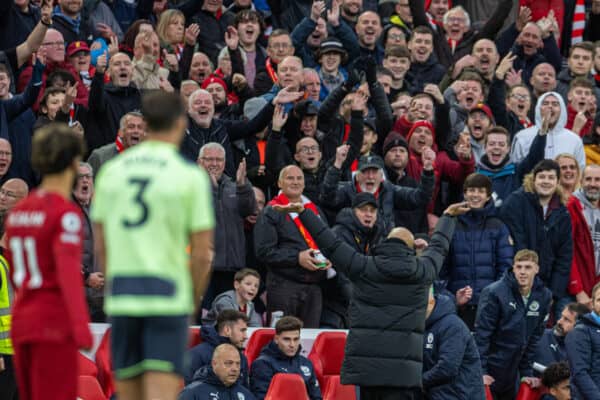 Liverpool assistant manager Pep Lijnders insists their rivalry with Manchester City has to come with respect if they are to avoid emotions boiling over again.

The last few years have seen a number of unsavoury incidents occur between supporters, with the latest meeting at Anfield in October marred by offensive graffiti about Hillsborough being written in the away section and allegations of chanting about the 1989 disaster, in which 97 fans died.

City’s also claimed coins had been thrown at their coaching staff, although a Liverpool investigation failed to find any evidence, and one of their buses was damaged on leaving Anfield.

Manager Jurgen Klopp was also sent off in that game for hurling abuse at an assistant referee, who did not flag for a foul by Bernardo Silva on Mohamed Salah.

Liverpool chief executive Billy Hogan and City counterpart Ferran Soriano have written a joint letter to supporters to remind them of their responsibilities in an attempt to calm tensions and Lijnders believes that was a good idea.

“It’s very positive that both clubs are co-operating. Ferran and Billy made a good statement, it was really clear,” he said ahead of their Carabao Cup meeting at the Etihad Stadium.

“We know games against City have importance and with rivalry comes emotion and that’s good.

“We need emotion from the stands and we need to feel these games matter. The only problem with emotion is when there’s no respect. Then it becomes really hard.”

The escalation of hostilities off the field extends back to 2018 when the City team coach was targeted with bottles and other items on its arrival for a Champions League quarter-final and since then, there has been simmering resentment between the two sets of fans.

Klopp was accused of stoking tensions ahead of their win two months ago – and his sending-off did not help his cause – with pre-match comments about City’s spending power, but Lijnders said the coaching staff had to take an more distanced view about what is happening in the stands and on the pitch.

“Of course. Top sport is emotion. It’s going to edges. Top sport is seeing the line that you want to go over but you hold yourself,” he added.

“For us it’s impossible to be fully emotional because the game is too quick for that.

“If I’m emotional to one side [of the pitch] the ball is already on the other side or Pep [Guardiola] has already changed something tactically and we have to be aware to counter it or whatever.

“The ones who control their emotions are always the ones who go furthest. Control your emotions, don’t let the emotions control you. We are an example of that in our team.”

Liverpool are likely to name a stronger-than-usual Carabao Cup side against City as they seek to maintain their grip on the trophy they won in February.

While neither Netherlands captain Virgil van Dijk nor Ibrahima Konate, both centre-backs, are set to feature, their forward line is likely to include Salah and Firmino (who were not at the World Cup) and Darwin Nunez (knocked out with Uruguay in the group stage).