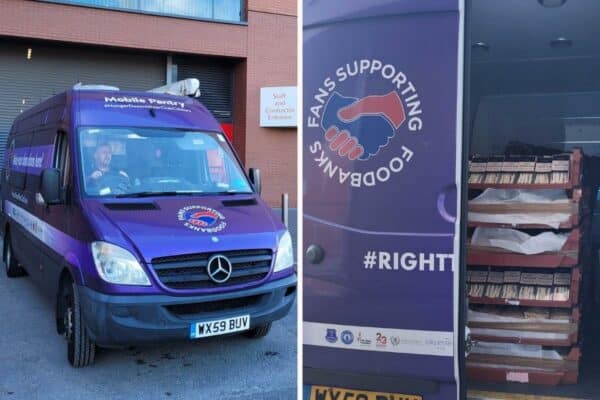 Liverpool FC surprised a local foodbank with a delivery of four trucks filled with essential food items worth £10,000, as part of its Operation Christmas Magic campaign.

The Reds made the donation to the North Liverpool Foodbank who will distribute the items, including tinned foods, pasta and vegetables, to other foodbanks across the Liverpool City Region.

LFC has worked with and supported St Andrew’s Community Network – home of the North Liverpool Foodbank – on the ongoing issue of food poverty for six years now.

This one-off donation, on top of the ongoing work the Club’s official charity LFC Foundation and Red Neighbours continue to deliver, was made in light of the fact there have been no home games recently due to the Qatar World Cup.

Red Neighbours assists Fans Supporting Foodbanks with collection points at every home game. The Club decided to step in and make up for the lack of match day donations and worked with local foodbanks to identify the key essential food items most in need.

When football returns LFC will also host a festive food collection at its home fixture on December 30 against Leicester City, encouraging fans and staff to donate essential food items to the Foodbank and Pantry Network across the Liverpool City Region.

Fans can also donate directly to the North Liverpool Foodbank by simply texting FOODBANKFC to 70460 to donate £5 or by visiting this page.

The Reds’ community Christmas campaign ‘LFC Operation Christmas Magic’ – which is now in its third year – is focussing its support on child and food poverty to address the ever-increasing need as the cost-of-living crisis continues to worsen.

More than 15 separate activities have been taking place throughout November and December, delivered by LFC Foundation and Red Neighbours, with support from LFC staff volunteers, supporters, players, former players and club partners AXA, Joie Baby and Quorn to bring communities together and spread festive cheer.

To ensure no child across the Liverpool City Region wakes up on Christmas morning without a gift, LFC is once again lending its support to Radio City Cash for Kids’ Mission Christmas by donating a thousand gifts.

Fans can support by donating new and unwrapped gifts at collection points located at any official Liverpool FC store in Liverpool, Chester or Belfast. A text-to-donate option is also available, simply by texting CITY to 70910 to give £10 or 70920 to donate £20.

A dedicated LFC fundraising page is also available for fans who wish to make a cash donation online here.