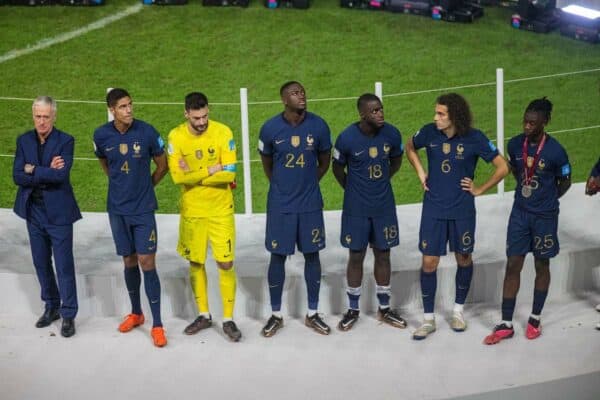 A standout tournament for Ibrahima Konate ended in misery as France lost to Argentina in the World Cup final, with Liverpool fans praising their No. 5.

Konate was a surprise inclusion in Didier Deschamps’ squad for the World Cup, having missed much of the buildup due to injury, but it was a deserved call-up on form.

The 23-year-old headed to Qatar as third choice behind Raphael Varane and Dayot Upamecano, however, and over four appearances on the road to the final, he made a mockery of the pecking order.

Nonetheless, when it came to the meeting with Argentina in Lusail, Konate was benched again – though there is a chance that, having suffered a virus in the week, he was not passed fully fit.

As an enthralling game ticked into extra time, the Liverpool defender was eventually sent on for an ailing Varane, and produced an influential display.

But it wasn’t to be for Konate and France, as Lionel Messi helped earn Argentina’s first World Cup trophy since 1986.

On Twitter after the game, there was resounding praise for Konate despite the result, with many of the belief that Deschamps set his side up to fail by omitting him.

Genuinely. He is a World Cup winning manager that sees these fellas train every day

I have no idea what it is

If Ibrahima Konaté started that World Cup final, France would have won it.

Not even on Extra time, in Normal time.

France would not have conceded 3 goals if Konate started. I am 100% convinced of that. Thankfully he was on the bench.

This is what happens when you bench Konaté

Others lauded Konate’s performance when he came on…

France’s only non-penalty big chance in the match was created by Ibrahima Konaté.

He’s scored in a penalty shootout this year too… pic.twitter.com/yLPmTANfU6

Won the corner which led to the pen

Key pass which was nearly an assist

we were about to get a konate wc final assist…

I’m so proud of Ibrahima Konate, he has genuinely been one of the best defenders at the tournament and deserved so much better.

So glad that he is at our club. pic.twitter.com/huQ6qOwR6E

It may not be as cut and dried as suggesting Konate’s absence cost France the World Cup, but it was a strange decision to leave him out and favour a struggling Upamecano.

The hope now is that Konate does not take his frustration in Qatar to heart, as he prepares to rejoin his Liverpool team-mates for the second half of the season.

Jurgen Klopp is expected to grant the Frenchman at least a week off after the final, which should rule him out of the upcoming clashes with Man City and Aston Villa.

There is a chance that Konate is back for the visit of Leicester on December 30, with a potential return to training next Monday.