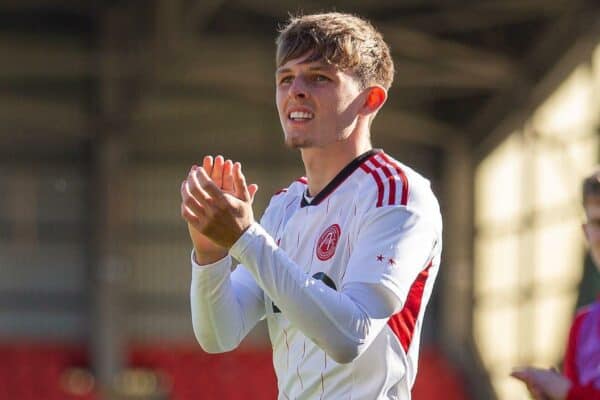 Liverpool midfielder Leighton Clarkson scored a spectacular fifth goal of his loan spell at Aberdeen on Tuesday, only for Rangers to claw back for victory.

Clarkson has found a temporary home at Aberdeen, following a difficult campaign last time out that included a stint at Blackburn cut short.

The 21-year-old has settled into a regular role with the Scottish club, operating in a variety of positions including as a No. 8 and a more attacking midfielder.

On Tuesday night, he made his 16th appearance, and his 13th start, for Jim Goodwin’s side, in the second visit of Glasgow opposition in four days.

After a 1-0 defeat to Celtic on Saturday, Aberdeen were hoping for more luck against Rangers, who are now managed by former Liverpool youth coach Michael Beale.

It took Rangers just 12 minutes to break the deadlock, though, as Fashion Sikala fired home at the second time of asking in the penalty area.

The visitors had more chances to punish a sloppy Aberdeen defence, but the tie was level on the brink of half-time as Duk produced a fine free-kick.

Eight minutes after the restart, it was an opportunity for Clarkson to step up.

And he did so remarkably, as he touched down James Sands’ weak clearance and hammered in a half-volley that gave Allan McGregor no chance.

Clarkson’s stunner looked to be sending Aberdeen on their way to a valuable win, only for Scott Arfield to net a brace in the fifth and seventh minutes of stoppage time to turn the game on its head.

“It’s a heck of a strike from a boy that I know quite well,” Beale smiled in his post-match press conference.

The youngster has made a habit of it during his time north of the border, with similar long-range efforts against St Mirren, St Johnstone and, in a mid-season friendly, Atlanta United.

He has also struck against Hibernian in the league and Annan Athletic in the League Cup, with five goals and two assists in 16 games in all competitions.

That is an average of a goal or assist every 157 minutes, which is impressive for a player not typically deployed in a forward position.

Journalist Ruaraidh Britton, writing for AberdeenLive, awarded Clarkson an eight-out-of-10 rating, adding: “He only scores stunners, and Tuesday night was no different.

“Clarkson was superb in the midfield and also worked to good effect when tracking back.”