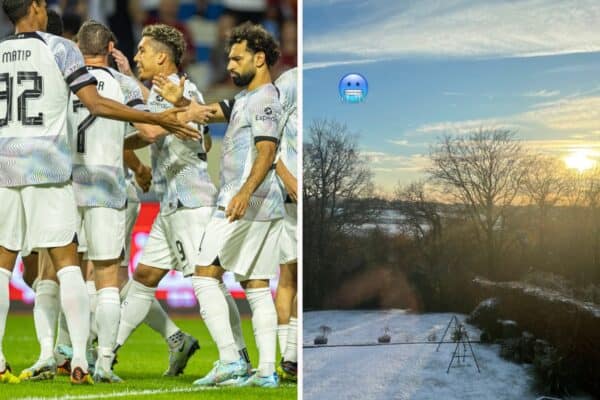 Alisson landed back on Merseyside and was greeted by snow, as he awaited the return of his Liverpool team-mates from a “perfect” ending in Dubai.

The Reds capped a productive training camp in the United Arab Emirates with a 4-1 victory over AC Milan on Friday, with Darwin Nunez scoring twice off the bench.

It came after a 3-1 defeat to Lyon earlier in the Dubai Super Cup, with results not the focus for Jurgen Klopp and his staff as they put the squad through rigorous preparations for the second half of the season.

Liverpool spent almost two weeks out in Dubai, and taking to Instagram as they got ready to head back to Merseyside, they savoured its benefits.

Andy Robertson was among those to relish an “important couple of weeks,” as James Milner looked to “get back into the thick of it”:

Stefan Bajcetic was one of the youngsters to have made the most of his chance out in Dubai, and the young midfielder described victory over Milan as the “perfect way to finish our camp”:

For Ben Doak, who caught the eye of Klopp with an assist for Nunez on Friday, it was simply a “good time away”:

Adrian, Thiago and Bobby Clark were all feeling positive as the Reds fly back to Merseyside:

They will be joined back at the AXA Training Centre by those already knocked out of the World Cup, with only Ibrahima Konate still in Qatar as he prepares for the final.

While Virgil van Dijk and Jordan Henderson headed to Dubai following their exit from the tournament, training at the NAS Sports Complex, Alisson and his family flew straight back to Merseyside.

There, they were met with snow – far removed from the high temperatures they enjoyed in Qatar.

Alisson is among those who could be in contention for the Carabao Cup fourth-round clash at Man City on Thursday night, though Klopp has suggested Van Dijk will not be involved.

It remains to be seen which World Cup players will be in the squad, but Klopp can already rely upon a strong core, boosted by a comprehensive victory to end their time in Dubai.

Now, like Alisson, they will be left to get used to the weather back in England.