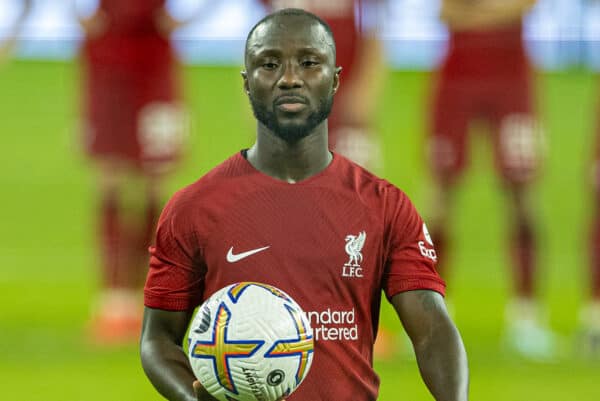 Liverpool “would still quite like to keep” Naby Keita, on 1 condition

Naby Keita is one of several Liverpool players who is out of contract next summer, but despite his unavailability this season, it’s being reported the Reds would “still quite like to keep him.”

The Guinean has only recently returned from injury, having picked up an injury after Liverpool’s Community Shield victory against Man City in July.

He took full part in the mid-season trip to Dubai earlier this month, featuring in friendlies against Lyon and AC Milan, and again came off the bench in the Carabao Cup clash against City on Thursday.

Given his poor injury record, many would assume that Liverpool will be happy to cut their losses and allow him to leave for free next summer.

However, according to one Merseyside based journalist, that isn’t exactly the case.

GOAL‘s Neil Jones has reported that, despite the fact Keita is free to negotiate with clubs overseas from January 1, Liverpool “would still quite like to keep Keita, but they would also like him to play a few games.”

That would suggest that, should Keita stay fit and play his part between now and the end of the season, there’s a good chance he’ll be offered a new contract.

With James Milner and Alex Oxlade-Chamberlain also entering the final months of their existing deals, it may make sense to retain at least one midfielder.

Liverpool are already staring at the possibility of an overhaul in that position in the summer transfer window, as the likes of Jude Bellingham and Enzo Fernandez continue to be linked with moves to Anfield.

Earlier this week, some reports in Argentina suggested Liverpool would like to sign Fernandez from Benfica in January, before loaning him back to Portugal for the remainder of the season.

Speaking on Redmen TV, Jones says a contact of his at Liverpool simply responded with a laughing crying emoji when he put that possibility to him in recent days.

Fernandez is clearly a player Liverpool admire, but whether they are in a position to compete with his other suitors financially, and what impact that may have on a potential pursuit of Bellingham, remains unclear.