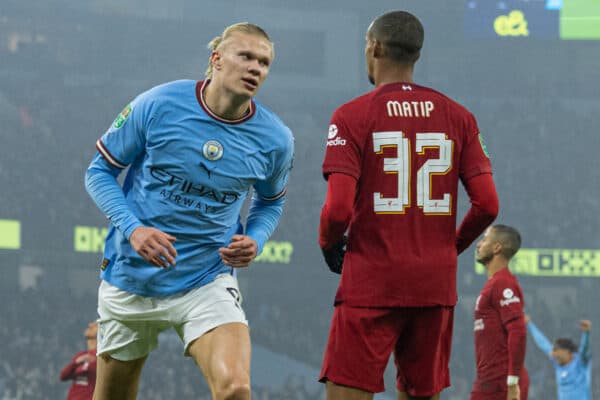 Liverpool hardly eased themselves back into action with a frenetic 3-2 defeat to Man City, exiting the Carabao Cup at the fourth-round stage.

After five-and-a-half weeks away, the two biggest sides in England faced off in the cup, and within the first minute, Erling Haaland and Darwin Nunez traded chances at either end.

It wasn’t long until Haaland got his goal, though, with Joe Gomez caught sleeping in the box as the Norwegian pounced onto Kevin De Bruyne’s cross to divert it beyond Caoimhin Kelleher.

Nunez struck the post from an offside position as Liverpool toiled for an opening, which came through the marauding Joel Matip, whose line-breaking run allowed James Milner to tee up Fabio Carvalho for 1-1.

Liverpool grew in confidence after drawing level, but De Bruyne remained an obvious threat, the midfielder laid on chances for Ilkay Gundogan and Nathan Ake only for Kelleher to make two strong saves.

Having lost Roberto Firmino in the buildup, Jurgen Klopp then saw Milner forced off with an injury before the break, throwing Nat Phillips into the fray.

Two more changes came at half-time as two players who struggled in the first 45 were brought off, with Carvalho and the yellow-carded Stefan Bajcetic replaced by Alex Oxlade-Chamberlain and Fabinho.

They had barely stepped foot on the pitch when Man City regained the lead, with Riyad Mahrez curling home a brilliant goal, and seconds later the scores were level again as Nunez set Mohamed Salah up for an improvised finish.

It was 3-2 to City before the hour, though, with another stunning delivery from De Bruyne allowing Ake to head in and atone for his earlier effort.

Nunez showed clear signs of ring rust as he shanked opportunity after opportunity wide, one that saw him bear down on Stefan Ortega with almost too much time to think about it, wasting a big chance to equalise.

Tempers flared between Rodri and Fabinho to show this was more than just a warmup to the Premier League‘s resumption, as did the celebrations at the final whistle as Man City progressed.

For Liverpool, focus now turns to Aston Villa, with a trip to the Midlands to come on Boxing Day.