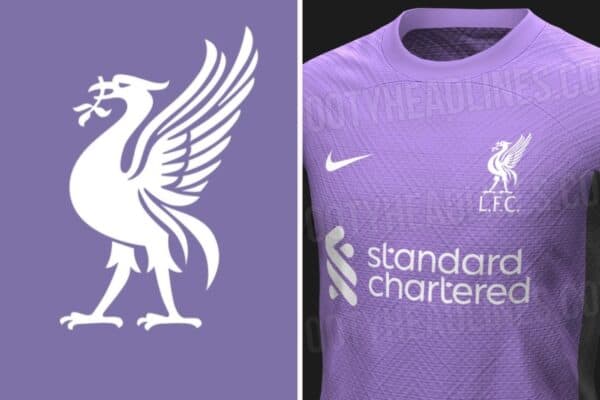 Liverpool are expected to wear ‘space purple’ as their third kit for the 2023/24 season, with a new predicted design likely to divide supporters.

As the end of the year approaches, designers and key figures at Nike will be working on finalising kits for the next campaign, which includes for Liverpool.

The Reds are currently in the third season of their long-term deal with the US manufacturer, and it has largely proved a popular partnership among fans.

There are, of course, some kits that have been more sought-after than others, with this season presenting two contrasting examples in a questionable white away kit and a standout dark green third kit.

Next term is likely to be the same, with leaked colourways for 2023/24 suggesting Liverpool will wear ‘green spark’ for the away kit and ‘space purple’ for the third.

The home shirt has already been leaked by reliable sources, and now Footy Headlines have made a prediction as to how the away shirt will look:

Convinced this is something New Balance already made Simon Mignolet wear… pic.twitter.com/q8LUlCJw9n

‘Space purple’, which can already be seen on this season’s home goalkeeper kit, will be the predominant colour, with Footy Headlines predicting a “clean and modern design.”

That, they suggest, could see white used for the logos and LFC badge and a dark grey known as ‘gridiron’ for the trim down the sides of the shirt.

“The template is set to be pretty similar to the 2022/23 season,” the report adds, with all three Liverpool shirts this season featuring an all-over print offset by minor details and simple collars.

It should be noted that their prediction is only given a 75 percent likelihood.

Liverpool’s outfielders last wore purple during the 2018/19 campaign that saw them win the Champions League, while before that there were purple elements on the Warrior third kit for 2013/14.