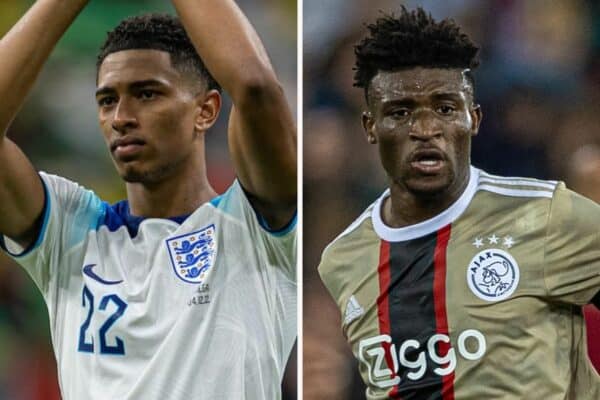 Another leading source has reported that Liverpool are believed to be “front-runners” to secure Jude Bellingham’s services next summer, while there is also a claim of “informal contact” with Mohammed Kudus.

Borussia Dortmund midfielder Bellingham is widely reported to be the Reds’ top transfer target, with his stock only rising after an impressive World Cup with England.

The Athletic‘s David Ornstein says “there is a feeling among interested parties that Liverpool may be front-runners” for Bellingham, but adds those other suitors “do not think the matter is closed.”

Ornstein names Real Madrid, Chelsea and Man City as the other teams keeping tabs on the situation, with the latter “not currently at the head of the queue but have him in their thoughts.”

It’s also highlighted how the uncertainty behind the scenes at Liverpool, with the club up for sale and sporting director Julian Ward set to leave next summer, could be a factor, with Jurgen Klopp “leading the pursuit” of Bellingham.

This report comes after claims in Germany last week that Bellingham’s family would prefer him to move to Anfield, with Liverpool “very, very close” with the player’s camp.

Elsewhere, Ornstein also credits Liverpool with an interest, or at least a previous one, in Ajax and Ghana’s Mohammed Kudus.

Reports in the Netherlands last month suggested the Reds were ready to “fight” Everton for the 22-year-old’s signature and here, it’s claimed Liverpool made “informal contact” last summer.

Kudus scored at Anfield for the Dutch outfit earlier this season, and was arguably Ghana’s standout player at the World Cup.

Ornstein says the player “has a firm desire” to leave Ajax in January, with the Premier League his preferred destination. A fee in the region of €35 million to €40 million is estimated as the minimum amount required for his services, but it’s also added that Ajax could be unwilling to sell in the winter window.

Everton struck a deal with the player in the summer, only for Ajax to block the move. The Toffees are still said to be interested.

The Ghanian is able to operate in a number of midfield and attacking positions, but Ornstein says Kudus wants to play in a midfield role in the future. Any further Liverpool interest may depend on whether they see him as an option for the middle of the park or further forward.